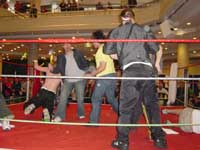 “Double D” Davey Deluxeo didn’t defeat Jarvis Solid in the main event of IPW @ Armageddon, but managed to retain the IPW Championship today at the Aotea Centre. Solid, who won the right to face Deluxeo after defeating Mr. Showtime on Saturday, came close to capturing the belt several times.

Just when it looked like Solid was about to take the win, XS interfered, beating Solid down. Solid rallied, and managed to nail a finisher on Deluxeo, however, the referee called for the bell, disqualifying Deluxeo.

XS then began beating Solid down, but just then, the entire IPW locker room rushed the ring, and chaos ensued. Bodies flew everywhere as the crowd went wild, chanting “IP-Dub!” as the show ended.

Other results from the show saw: