by NZPWI
in NZ Scene Features
0

HALL OF FAMERS: Beloved New Zealand tag team The Bushwhackers will be inducted into the WWE Hall of Fame this year. PHOTO: WWE 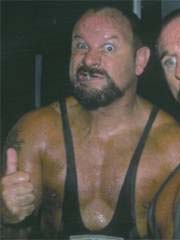 As one half of the successful Bushwhacker team, Luke represented New Zealand throughout the late 80s and early 90s on WWF television with partner Butch Miller.

The interview focuses on Luke’s life before the WWF, growing up in Wellington and wrestling in the NWA and Puerto Rico.

Dion McCracken: First of all, thank you very much for the opportunity of this interview, there are a lot of fans in New Zealand wondering how you two are getting on. Before we get started, I’d like to clear up the current health status of Butch. The latest news is that he recently came out of hospital after a long stint healing from a staph infection. Is he completely healed, and how is he doing?

Luke Williams: Butch came out of the hospital on the 23rd of November, got a medical clearance and is going to rehab five days a week. He went down to 140 pounds and is already up to 175 pounds. Staph closed his whole body down, that up until 10 days ago he was in a wheel chair. In hospital for nine weeks.

The ‘mainstream’ of New Zealand wrestling fans first saw you appear in the WWF in 1988 as The Bushwhackers, but long before that, Luke Williams and Butch Miller had a successful stint as The Kiwis, and more so as The Sheepherders with Jonathon Boyd. How did you and Butch meet, and how did The Sheepherders get started in the United States?

Butch and myself have been wrestling for many moons. Used to go to the same gym in Wellington. The fans around the world know us as cousins. It has been televised like that since 1980. We were working for Steve Rickard in Hawaii and met Buddy Rose and Roddy Piper who got us booked in the Northwest for Don Owens. The territory was Oregon, Washington and Vancouver, Canada. We were working 100 days straight, a day off then the same again. 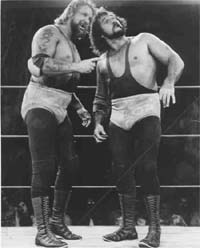 The Sheepherders are known as one of the most violent teams in the history of wrestling. How did the crowds in the US territories react to your style? Did you come across any opposition to the style from crowds or promoters or other talent?

Being foreigners in the USA and pushing the NZ flag down their throats, we got a lot of heat. Many nights our car tyres were slit or our windows were knocked out. I could tell you stories all night about escaping from arenas and fans. Those days there was about 30 promotions running every night in North America.

The Sheepherders did very well in the territories, picking up numerous tag team championships, beating teams such as “Dr Death” Steve Williams and Ted DiBiase, The Headshrinkers, and Roddy Piper and Rick Martel. How was the rise to success for you and Butch, and what are your most treasured memories from those days?

From day one we worked the top tag team spot in numerous territories. We were in Charlotte in 1981, NWA, the second biggest office in USA but didn’t know the power of Turner’s Cable TBS. Left and went to Puerto Rico. That was our first mistake. We didn’t know we were getting nationwide [TV] coverage. Working for Vince, we were seen in 100-plus countries and were working in 30 odd.

How was it working in Puerto Rico? Was that a completely different experience than you were used to in North America?

Puerto Rico was and still is a violent territory. IWA is more WWF as a lot of young talent go to this office to get groomed. Capital Sport has been going since 1975. Butch and myself drew some big crowds in ball parks in Puerto Rico. In 1985 at the anniversary show, the card did a half a million dollars in three days. We were one of the main events. [Bruiser] Brody and Abdullah [the Butcher] were the single main. Barbed wire, fire, cage and chain matches are some favorites with the fans. We had a lot of bloody wars down there with all the babyfaces through the 80s and 90s. From 1988 to 1997 we worked for WWF so wasn’t down there.

After leaving Puerto Rico, you headed back to the NWA. You regretted the break from the NWA, but did that break affect your momentum as far as popularity or getting a push was concerned?

We were known for being wild wrestlers and anti-American so a lot of promoters wanted us to come into their promotion to work with their top babyface tag team. Jim Crockett wouldn’t book us ’til 1987 as he was teaching us a lesson for walking out on him in 1981. We worked for NWA subsidiaries around the country. Dusty Rhodes was Crockett’s booker and he worked against us in numerous territories and in ’86 or ’87 we were back in Charlotte, NWA headquarters and on [cable] TV throughout the USA and Canada and wherever Ted Turner sent the show.

It’s unfortunate for Kiwi fans that perhaps some of your most talked about matches weren’t in the WWF, but were when you were in the territories taking on the likes of Ric Martel, Roddy Piper, The Fantastics, and competing in the Crockett Cup. Of your pre-WWF days, is there a particular match or program with another team that you are most proud of?

The Fabulous Ones, [Steve Keirn & Stan Lane] who were the first to have vignettes made, non-wrestling with music. Jerry Jarrett, Jeff’s dad, owned the territory and produced the videos and promoted the team with these. This was in the early 1980s and we fought The Fabs all over The States ’til we went to work for WWF. Some areas we worked against them every night for weeks on end. Another team was The Zambue Express, who were two coloured guys around 350 to 400 pounds. Drew some big crowds in ball parks.

How would you describe the NWA locker room of the late 80s? Was there a real sense of making the promotion number one, or did a lot of the talent see it as a stepping stone to the WWF?

The NWA had a great pool but too many prima donnas. At the time Flair was the champ but Dusty Rhodes was the booker and everything was around him. It took the Four Horsemen to take him down – Flair was one of the Horsemen. Understand my drift? The talent laughed at WWF as it was not wrestling but a big pantomime. WWF was turning people away at all venues where NWA was only selling out some. NWA locker room was full of egos and a lot of back stabbing.

The NWA had a great talent pool during that era. Ric Flair, The Road Warriors, Sting, Dusty Rhodes, Larry Zybsko and many more. Even though you were seasoned veterans by this stage, were you still two Kiwi boys in awe of wrestling these legends? How did you and Butch get on with the likes of those mentioned?

We were in NWA before any of this talent had put their boots on except Flair and Rhodes. We were in a territory when Sting and the [Ultimate] Warrior started as a tag team. We used to help them after their matches, tell them what they should have done. We were first in the NWA in 1980. Sting, Luger, Warrior, Steiners and so on didn’t start for the NWA ’til 1986 or 1987. The Road Warriors started 1983 and I remember working with them in 1984 in Waco, Texas, and Hawk going over to the ropes and puking at the fans. He was blown up, out of steam. Hawk has been my neighbour for the last five years. As you can see these guys watched Butch and me on TV well before they started. They got the lucky breaks.

You must have made some great friends and contacts during your NWA stint. Who and what would you miss the most after moving on to the WWF?

We were so glad to get out of that scene as we got a lot of promises which were never kept and started some hot feuds which were cut off as they were doing better than the ones the ‘clique’ were doing. We were never office stooges or in their clique and that was what NWA was about. NWA had a lot of prima donnas and we were two hard working Kiwis that didn’t understand the politics of the game.

Soon after, you were contacted by Vince McMahon to be brought into the World Wrestling Federation. Even though Vince was the top promoter in North America, was there ever any doubt that you’d leave the NWA?

As soon as we got the call from Vince we were on a plane up to New York. We had been sending WWF tapes for about four years but they already had a British tag team, The British Bulldogs. When they were finished we were in. No whens, buts or whys. That was the ultimate as WWF had taken over the world wrestling business.

Who came up with the Bushwhackers character – both the name and the gimmick?

How long was your first WWF contract, and how long did you stay with Vince?

The first contract was for three years which rolled over each year if nobody gave notice 90 days before contract date. Lasted from October 1988 to November 1997.

WWE SummerSlam 2019, and Getting Rowdy: The Unreleased Matches of Roddy Piper are the latest WWE DVD titles available this...

With New Zealanders still buzzing about The Bushwhackers, film-maker Adam Simpson will appear on Radio LiveSport tomorrow morning to discuss...