Life after the road: A day with ‘Bushwhacker’ Butch 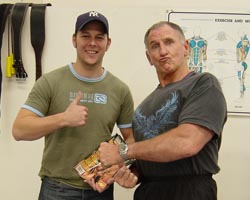 The sleepy and beautiful Kapiti Coast is a world away from the bright lights of Madison Square Garden, but it’s now a place that former WWE Superstar “Bushwhacker” Butch Miller is proud to call home.

It’s a sunny late September afternoon, and my wife and I make our way to Miller’s home, not knowing what to expect. Several years of emails and phone calls had never resulted in a face-to-face meeting, until now. Thoughts run through my head randomly—what state of health will Butch be in after his bout with a staph infection that saw him lose half his weight just three years ago? What if he’s not the genuinely nice guy that I’ve become acquainted with?

Seconds after Butch opens the door, my mind is at great ease.

“G’day Dion, mate,” Butch says as he opens the door. Immediately I’m struck by the size of the man. If you hadn’t known of his state just a few years ago, you wouldn’t believe the stories. His chest more than fills his t-shirt as he prepares for work—a sight that would put most “weekend warriors” and “gym rats” to shame. Miller is certainly back in shape, and then some.

As we make our way to the lounge, Butch begins his stories from his days with WWE and expresses his shock at the recent death (just days earlier) of Ray “Big Bossman” Traylor.

“That’s a shame, a real shame. He was a bloody nice guy—real intense in the ring. I remember a time when him and The Nasties almost had a go backstage after a match. There was a spot where Bossman had to do a run-in and took The Nasties apart. They were a little upset with how intense the beating was—it was almost real. But that was Bossman’s style—he wasn’t stiff, just real, real intense in the ring.”

Butch’s flat sits moments from the beach and is very homely with pictures of friends and family adorning every table and cabinet.

“So how’s your health? You’re looking in bloody good shape,” I ask.

He goes on to talk about his ordeal three years ago when long-time friend and Bushwhacker tag team partner Luke Williams found Miller lying on the ground in his home unable to reach a phone to call for help. An ordeal that would see him in hospital for a long time—in fact, just recently being able to throw away the crutches for good.

“See this ankle here?” Butch says while pointing to his left foot. “They took the ankle right out so I can’t move my foot up and down any more. Lucky though, they wanted to take the whole bloody leg and I told the doc, ‘Bugger that, what happens if a dog runs away with my bloody foot, how do I chase after the thing?’. He found that bloody funny.

“But really, they were bloody great to me, they did a real good job. I’ve still got a few problems with my shoulder and there are certain exercises I can’t do at the gym, but I work around it and I’m doing okay.”

The third anniversary of Luke finding Butch in his home had just passed and as always on that same day every year, Butch called his mate and thanked him before becoming the victim of Luke’s latest rib.

“Luke always bloody ribs me, telling me there’s a spot for a midget wrestler in Puerto Rico and do I want to go over there to fill the spot—because I haven’t got my ankles!

“You know, when I was in Florida, there were so many of the boys living nearby. Within just a few miles of me was Greg Valentine, Jimmy Hart, The Nasties, Hulk, Brutus Beefcake, Hawk—who of course died not long ago—and of course Luke. It was a good spot.

“I miss the boys on the road, but I’m real happy to be back in New Zealand. Real happy,” Butch says while looking toward the coast.

Still, Butch would go on to share some great stories from the road, and it was apparent that those were some of the greatest years of his life. 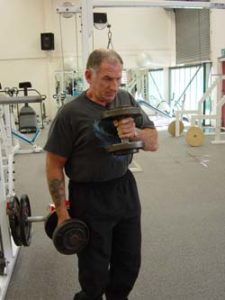 Time had flown and Butch was due at his new job which he started just a few short weeks earlier at a gym in Paraparaumu—something he describes as his “dream job”.

“The gym has always been like a second home to me, all my life. I love it,” Butch says while packing his evening meal.

“Why don’t you follow me and come and have a look? We can talk more there.”

Butch landed the job out of a stroke of good timing. A regular member, Butch was speaking to an employee who was worried about telling her boss she had to leave.

“‘Let me know the minute you’ve told him’ I said to her, which she did. I then hit the owner up for a job, and here I am!”

It becomes apparent as soon as Butch walks in the door that he’s a popular staffer, with all of the members making sure they say hello, with some even asking when his scheduled 3 News appearance will air.

“Well, I’ll tell you what happened,” he starts to joke with one. “My make-up was all wrong, see. They have to come back and re-shoot some footage. See this?” he says, pointing to a small bald patch. “They’re waiting for this to grow back so they don’t get the glare in the camera like last time.”

The gym member walks off laughing, with Butch clearly adding some spark into an otherwise monotonous workout.

“I’ve always been a bloody prankster,” Butch says to me. “I remember this one time, Luke was ready to go out on a big date that he was real excited about. I hid his teeth and put a vending machine in front of his door,” Butch begins laughing hysterically.

“He tracked me down and screamed, ‘Look, I’m sick of this! Why do you have to do this all the time?’—’I can’t help myself!’ I told him.

“He’s got a bloody good mind for the business though. I was just along for the ride—in for the fun of it, but he was always very business like. I think that’s why we got along so well for so long. Not many partnerships last as long as ours did. I can’t think of many that lasted as long as us. That’s really saying something.”

I see immediately that the notice board is full of recent clippings from local newspapers which have picked up on the fact that a former-WWF star is in the community as Butch assists gym members and goes about his daily chores before coming back to talk more about his days on the road.

“You know, when we were The Sheepherders, things were crazy. We’d have to literally fight our way into the arena, wrestle our match, fight our way out, and then get to our car to see the windscreen smashed or the tyres slashed. But when Vince came out with this ‘sports entertainment’ everything changed. Suddenly his guys were big stars—celebrities even. People were happy and proud to be fans and really respected the talent, you know? And we’d see a different type of fan coming along—lawyers, doctors, you name it. It all changed.”

Butch begins flipping through a couple of WWF magazines from 1989 that I brought along, stopping now and then to tell stories of certain people, but more often than not to tell how much of a “bloody nice guy” his old pals were with a reminiscent look in his eyes.

“That’s how I remember you,” my wife says to Butch after taking a photo of us.

“How do you mean?” Butch asks.

“With that look on your face—that’s how I remember you from when I was a kid.”

“Put a bloody camera in front of me and I can’t help it —it’s all over. I’m Butch again!”

As our time with Butch comes to an end, he jokes that I’ve become like his new agent after organising a few recent media appearances.

“Yeah… so is the cheque,” Butch laughs.

NZPWI's Dion McCracken interviewed "Bushwhacker" Luke Williams in February of 2002. As one half of the successful Bushwhacker team, Luke...