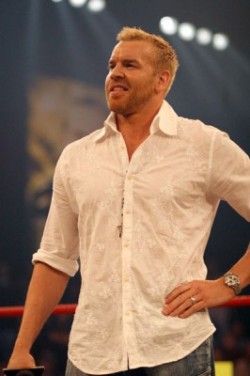 On Wednesday morning, NZPWI Columnist Kirsty Quested had the opportunity to participate in the Spike TV/TNA conference call with none other than Captain Charisma, Christian Cage.

Reporters from radio stations, newspapers and websites across North America were present, with NZPWI the only international participant.

Christian spoke candidly to all the reporters. He confirmed that he himself had not made the decision fully to jump from WWE to TNA until the day his WWE contract expired. He confirmed that he had been frustrated with the direction WWE Creative were taking his character, and that this was instrumental in his decision to move to TNA.

He also spoke about the heavy schedules WWE performers are expected to maintain, and said that it was the best decision for not only him, but for his family, that he undertake a lighter load, which he is able to do in TNA.

Since arriving in TNA, he spoke about the excitement everyone there shares for the future of TNA, the support and backing from Spike TV, and his plans for capturing the NWA World Heavyweight Championship.

Christian emphasised how much he appreciated the fans’ support during his transition from WWE to TNA, and said that it was really brought home to him when he stepped out into the iMPACT! Arena the night of the Genesis PPV.

Christian spoke about the loss of his friend Eddie Guerrero, and how the tragic news did not really hit home until after the Genesis PPV, when he made his TNA debut. Christian remarked that he was in denial until Eddie’s funeral, and then spoke about how beloved Eddie had been and how much he will miss him.

All reporters were given one-on-one time to ask Christian a few short questions. Below is a transcript of Kirsty’s time slot with Captain Charisma.

Kirsty Quested: Hi Christian, how are you?

Christian: Not bad, yourself?

Not too bad. In terms of locker room morale and backstage camaraderie, how would you compare TNA with WWE?

I will say, in WWE, it’s very much a team atmosphere, you know? There’s camaraderie in both. Like I was saying, my experiences there were great. I mean, I got along well with everybody in the locker room, and TNA I feel the same way. But I will say about the TNA locker room, there’s a great feeling there that something special is happening, and it’s something, it’s a company that’s on the rise, and iMPACT! is on the rise, and everybody there is excited, and everybody is working as a unit to make sure that this show becomes something really special, and it’s exciting to be a part of that.

When you moved over to TNA, what was it like running into guys that you had worked with in WWE like the Dudleyz and Rhino, guys like that?

Well it’s funny, because you know, I kept in touch with those guys. So I mean, even though I didn’t see them as often as I was used to seeing them, I was still talking to them every week, so that was… I mean, it was funny too because they kept calling me the week of the show, leaving me messages, wondering if it was me that was showing up, because nobody knew, and I wasn’t answering my phone so…

… so it was pretty funny. But no, it was good to be in there with those guys again, we always have a lot of fun together and you know all of us are really looking forward to being a part of this team.

You said that you stayed in touch with those guys when they moved over to TNA; on the opposite side, are you still in touch with anyone over at WWE?

Yeah of course, I mean I was there for 8 years, they’ll be my friends for life, so of course I am, yeah.

You said before that it was a hard decision for you to leave WWE right up until the day that your contract expired. When you said that you weren’t going to be coming back, what was the reaction of the people in WWE? Were they surprised, or did they see it coming?

No, I honestly don’t believe… I think they were shocked. You know, I think the guys in the locker room were surprised, as was management, and you know what… it was kinda surreal for me too my last couple of days there, because I knew that I was leaving, so you know, it surprised me as well, and like I said, I think it was a real shock for everybody, to be honest.

If you're asking Big E, New Day Rocks. The two-time WWE Tag Team Champion is having the time of his life...

Randy Orton became the youngest World Heavyweight Champion in WWE history at just 24 years of age. The grandson of Bob...