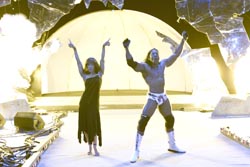 On Friday December 9, NZPWI’s Kirsty Quested had the privilege of speaking with WWE Diva, Sharmell.

Sharmell has been the driving force behind her husband Booker T’s quest for the US Championship, thwarting each attempt challenger Chris Benoit makes to recapture it, insisting that her man is most worthy of the gold.

Sharmell spoke to Kirsty about her relationship with Booker, her time as a Nitro Girl, and voiced her own opinions on Melina’s claim of being the most dominant Diva in WWE.

She’s a former Miss Black America, she was Nitro Girl Paisley in WCW, and she is now proudly at the side of her husband, WWE Superstar Booker T. She is the lovely and talented Sharmell.
Kirsty Quested: Hi Sharmell, how ya doing?

Sharmell: I’m great how are you?

I’m really good. Thank you so much for being with us today.

Oh no problem, it’s my pleasure.
Sharmell, the female fans don’t get to hear many love stories out of wrestling. Can you tell us the story of you and Booker?

Well, I met Booker back when I was in WCW, I was a Nitro girl and of course, he was one of the top wrestlers of WCW, and just over the years we got to know each other and decided that we wanted to give this romance thing a shot.

Luckily, it worked out, so all is well and we’re celebrating our one year anniversary pretty soon.

Thank you.
How are you enjoying working together, has it been different to what you anticipated?

You know, it’s funny because a lot of my friends tease me and Booker, they say that we’re such a power couple, they don’t know how we do it, because they say if they had to work together and live together they’d kill each other.

I’ll tell you, it is absolutely amazing, we are having the time of our lives, I mean I couldn’t dream of anything more wonderful than this, seriously, it’s just amazing.
Yeah, because I mean, as you were saying, most people in the wrestling business, they have to spend so much time away from their families…

But you and Booker have the luxury of working together in WWE, so this has been a really positive thing for your relationship?

It definitely has, because you know, the road is a lonely place. City to city, town to town, so, and you know, we’re only at home three days a week, if we’re lucky. So the fact that we’re able to travel together, just makes it so much better. 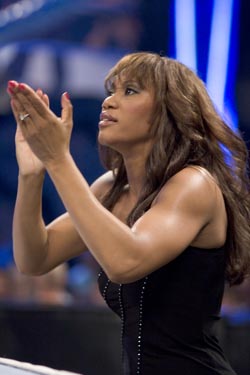 Before you became involved in the actual storyline with Booker, you were very visible at ringside cheering him on. Had the decision been made that early on that you would eventually become involved in the story with him?

I think it’s definitely gotten better, because when I first started there weren’t too many women who were taken seriously as wrestlers. Now we do have a history of some serious female wrestlers like The Fabulous Moolah, you know, we had Madusa, but now a lot of the women are stepping up to the plate, you know Trish Stratus kinda started out as a fitness model type girl, but now she’s one of the toughest girls that we have.

So we have girls that are in the ring, mixing it up just like the men are, and they’re bringing a positive light to women wrestlers, showing everybody that females can be wrestlers too.
You were a member of the Nitro Girls in WCW. What are some of your best memories of that time?

Oh my gosh. Family moments. Those girls truly are my sisters; a few of them were bridesmaids at my wedding. I just met some of the most amazing people, and some of my best friends for life came from the Nitro Girls.

You wrestled as Paisley in WCW, and you wrestled in OVW as well. Is there any chance of seeing you back in the ring as part of a husband and wife tag team?

She’s the most dominant little girl…

No questions asked! I’m the queen of that castle.

You know, Booker and Chris Benoit have begun their second Best of Seven series of matches for the US Championship…

Do you think they’ll manage to keep those matches as unique as they did the first time round?

I believe so, because, you know as much as I don’t like Chris Benoit, I have to give it to him, he’s an amazing wrestler. He is so creative, he’s amazing, and you know, Booker is just as amazing as Chris Benoit is, so they can definitely, those two can definitely keep it fresh and new.
Yeah? You think they can do another whole series of seven that were different to the ones they had before?

Oh, absolutely. Absolutely without a doubt.
Sharmell, you’re arguably one of the best dressed Divas in the WWE. I have to ask; do you have just one designer, or are all those fabulous gowns from different people?

They’re all from different people, and luckily I’m still the same size that I was a few years back when I was a pageant queen, when I was Miss Black America, so I’m still able to recycle some of my old gowns, but yeah, I do a lot of different designers, I like to mix it up.
Have you got any favourite designers?

Ah, no I don’t have any favourite, because my style is always changing, so I’m always looking for the new, next, up-and-coming cutting edge type of designer, so I don’t have one favourite, I’m not partial to anyone, but you know, if there’s anyone out there who wants to sponsor me, who thinks that they have “that line” that totally suits me, I am open to it.
Sharmell, SmackDown is coming out to New Zealand in March…

… have you ever been out here before?

I think that I have, when I toured with James Brown, I’m going to have to go check my passport though because I’ve been so many places in the past ten or twelve years that it gets kind of hard for me to remember, but I think that I have.
Are you looking forward to coming out here a second time?

I definitely am, and hopefully I’ll get some time to spend and see the sights, because that’s normally one thing I don’t get a chance to do. So hopefully, I’ll be able to do some sight-seeing and just really enjoy New Zealand.
Oh, well I hope that you do, because we do have some wonderful country out here to see, if you haven’t seen it before. So hopefully you will get to have a look around.

Yeah, hopefully. That’s what I’m looking forward to.
Sharmell, it’s been an absolute pleasure talking with you today, thank you so much for joining us, and …

Thank you! And I’ll see you guys soon.
Yeah, we’re all really looking forward to seeing you out here in March.

Awesome.
And all the best for that US Championship.

Off the Mat: Michel Mulipola

When it comes to Auckland-based artist Michel Mulipola, we've covered a wide variety of topics here on NZPWI – specifically...