Thousands turn up to meet Batista and Shane in Wellington 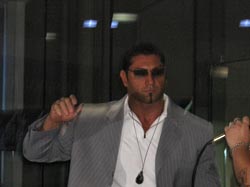 Thousands of enthusiastic fans of all ages lined the footpaths of Wellington yesterday for the chance to meet the current World Heavyweight Champion Batista and the master of the suicidal bump, Shane McMahon, as part of the build up to next years show on March 4 at Westpac Stadium.

Before beginning signing at 12.30, the champion took the time to walk the line thanking fans. This was met with a loud “Eddie” chant as a show of respect for the recently deceased superstar.

Unfortunately, due to time constraints, both men were only able to sign for a small percentage of the amassed fans despite going flat-out for two hours. Before he left however, Batista took the time to personally thank all the fans that were left waiting for their overwhelming support throughout the day, and said he hoped to see all of them come March 4.

The atmosphere of the fans and the generosity of both stars combined to leave the faithful fans with memories they won’t soon forget.