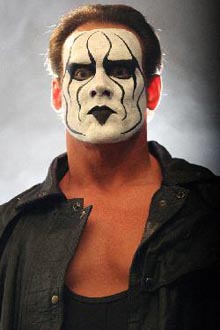 On Thursday January 11th, NZPWI’s Kirsty Quested had the opportunity to participate in a Spike TV/TNA conference call with none other than TNA’s latest major acquisition, wrestling legend Sting.

Sting (Steve Borden) is set to make his return to professional wrestling at TNA’s first pay-per-view for 2006, Final Resolution. He will be teaming up with Christian Cage against NWA World Heavyweight Champion Jeff Jarrett, and “The Alpha Male” Monty Brown.

Reporters from newspapers, radio stations and websites around North America were present for the conference. NZPWI was the only international participant, but Sting remembered immediately his time spent here for WWA: The Reckoning.

Sting talked about his excitment of returning to the ring, saying that he hoped there wasn’t too much ring rust and that he’d been working hard in the gym to ensure he was fit and ready. He spoke about how much he was looking forward to working with many of the wrestlers on the TNA roster, most especially Abyss, saying that Abyss has the kind of style he has always worked well with.

The Stinger spoke about his Christian beliefs, stating that God had led him to the decision to sign with TNA, and that he felt TNA were the company best suited to his moral code. He declined to elaborate much on his conversations with WWE, saying only that in the conversations he had had with Vince McMahon, the WWE Chairman was always very respectful and polite.

He emphasised how glad he was to return to the spotlight, saying that he felt he had not really had a chance to say a proper goodbye to his fans after WCW was swallowed by WWE, and that he welcomed the opportunity to interact with his fans again. Although Sting has only signed a one-year deal with TNA, he was quick to underscore that anything can happen over the course of a year, and that there was every possibility of his remaining with TNA after the year is up.

When asked about his family, sting said that his 15 and 13 year old sons were excited about the prospect of seeing their dad in the ring again. He said that TNA represented the best deal for his family, whom he considers his top priority and who he says he will not leave again for a relentless touring schedule such as WWE stars undertake.

All reporters involved in the conference call were given an opportunity to ask the Stinger a few short questions. The interview Sting gave Kirsty is reproduced below.

Kirsty Quested: Hi Sting, this is Kirsty from the New Zealand Pro Wrestling Informer, how are you?

Sting: Wow, New Zealand! I’m good, how are you?

Yeah – you remember being out here a few years ago, yeah?

Oh yeah! How are the All Blacks doing?

The All Blacks are kicking butt, they’re doing really well.

As usual, definitely. They’ve won the Grand Slam over in Europe.

Yeah, I’ll bet. Our Editor interviewed you a while ago as well, I think back in 2003.

Sting, what is it that makes TNA exceptional, what makes it a good choice for someone of your moral standing?

Well, it’s a lot cleaner show than everything else that’s out there right now. And I’m not saying that it’s perfect, but it’s a much cleaner show. The wrestling action on there is second to none, in my opinion. It’s unbelieveable, I mean it is what it says, it’s Total Non-stop Action, and I know there are a lot of talented people out there that are just looking for the right avenue, the right tool to get their names out there, and you know I think that TNA and Spike TV is a really good start. I mean, I think it’s going to be really really good, so…
You mentioned that you think the wrestling over there is second to none; what were your first thoughts when you saw X-Division wrestling for the first time?

Well, I thought that I had seen it all when I watched the Cruiserweight Division with WCW, and all those guys doing some of the moves that they do, and then when I saw this, on TNA, I said “You gotta be kidding me.” I mean, I don’t know how it’s humanly possible to do some of the things that they do. As a matter of fact I watched it and thought “Oh – I can’t do this anymore.”

… there’s no way I can come back and do this, it’s just passed me by, it’s so far by me that… you know, what can I bring, what can I offer? But you know, as I started to watch, and realise that there’s still guys out there that are wrestling like me too,and I’m going to depend on storyline too to try to drive this thing. 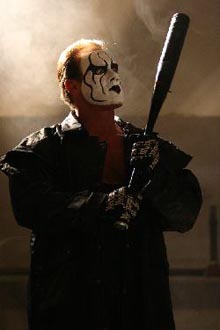 For sure. How does it feel to be re-establishing yourself, kind of as a TNA star, after having been WCW’s franchise player for so long?

Well, no, how does it feel coming into the locker room as the new guy, after being the main-event player in WCW for so long?

It is a major challenge. I mean, there is a work ahead of me that is insurmountable… it is so big, and I know that. I keep saying that I’m up for the challenge, and I am, I mean I’m ready for it, and I know that there are people, wrestling fans that do not want me to come back, there are wrestlers that don’t want me to be back there, but then again there’s alot of them that do. So I know that I have the physical part of it, you know my age is a factor now, you know I’m not the young spring chicken that I was at one time, and so I have all these issues and things that I know I have to deal with. And we’re trying to launch this show, we’re trying to make it a popular show, and trying to get a better time slot; there’s just so much that’s ahead, it’s unbelieveable, but I’ve been a part of a company that had to do that once before. So I know it can be done. So, if anything, maybe I can add some of that tenacity, or the fight to be able to just fight through the tough times and the, potentially the thin times that might be ahead, although I’m believing that we’re going to be successful soon.
Well thanks very much for your time, all the best for Final Resolution, we’re really looking forward to seeing you back in the ring. Thanks very much.

Hey, if you have any connections on getting my ring jacket back, that I wore when I was out there with you guys…

Do you know what, we actually have been working on that. The staff at NZPWI, we’re aware of it, and we’re doing our best to try and track it down…

Someone put it on ebay…

Some guy put it on ebay out there.

Did you know that? Yeah, he actually tried to sell it.

[Pause while I register my disgust…]

Oh well, there are words for that…

I would love to get it back, so…

Hey look, we’ll do our best, I know that my Editor’s been trying to track it down, somebody did mention to him, “please can you find Steve’s ring jacket”, so we’re doing our best on that one.

All right, we’ll see ya.