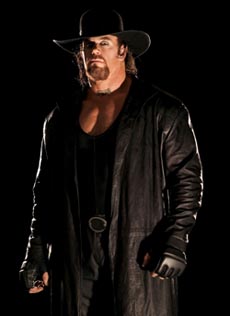 It’s the news everyone has been waiting for…

Will the Undertaker be at the show in Wellington?

In an NZPWI exclusive, the months of speculation end. The card for the WWE Road to WrestleMania show in Wellington will feature none other than the Deadman himself – The Undertaker.

Since news of the tour broke, speculation has run rife concerning whether or not the WWE legend would be part of the show. With his unique, dramatic entrance, incredible in-ring skills and amazing overall presence, it’s no wonder the Undertaker is the star so many fans want to see.

It is NZPWI’s great pleasure to announce the inclusion of the Deadman on the Wellington card, after receiving the following press release today:

World Wrestling Entertainment ® and Dainty Consolidated Entertainment today revealed that the UNDERTAKER ® has been added to the list of SmackDown Superstars appearing in New Zealand’s first ever WWE Live Event at Wellington’s Westpac Stadium on Saturday 4th March.

The 6ft 10, 328 pound UNDERTAKER ® has dominated WWE for 15 years and is no stranger to championship gold. Just a year after his 1991 debut at Survivor Series, the UNDERTAKER ® defeated WWE Hall of Famer Hulk Hogan for his first of four WWE Championships. The Deadman is also a 6-time former World Tag Team Champion, as well as a former Hardcore Champion.

“We are delighted to confirm the legendary UNDERTAKER ® will be part of New Zealand’s first ever Live World Wrestling Entertainment ® Event.

This is a MUST SEE event for any serious sports fans.

With over 20,000 fans expected to be in attendance the atmosphere in Westpac Stadium will be similar to a sold out All Black’s game.  The list of Superstars already confirmed is awesome and once you add a few tons of pyrotechnics and some sexy Diva’s we are in for one hell of a night”.

Other WWE SmackDown Superstars confirmed to appear are:

…and many many more!!

Please note that card is subject to change