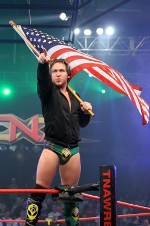 Last week, NZPWI’s Kirsty Quested had the privilege of speaking with one of the stars of TNA’s X-Division, Chris Sabin.

Trained by Scott D’Amore, Chris remains one of the youngest competitors on TNA’s roster. New Zealand fans will remember his outstanding match in Auckland during the WWA tour, in which his victory unified the TNA X-Title and the WWA Cruiserweight Title.

Since that time, Chris has become a mainstay of TNA’s X-Division, leading Team USA to victory this year in the Super X Cup Tournament. He competed in the very first Ultimate X match, and recently vanquished Kevin Nash’s claims that “size does matter” by defeating him at Victory Road.

At Hard Justice last month, Chris defeated Alex Shelley to become the #1 Contender for the X-Division Championship, and on September 24 at No Surrender, will take on Senshi for the coveted title.

Kirsty Quested: Though he is one of the youngest stars in the industry, my guest at this time is already a veteran of TNA’s X-Division.  His incredible versatility and athleticism have seen him capture the X-Title multiple times. He is, as his name states, the future – Chris Sabin.

Chris, how are you?

Chris Sabin: I’m good, I am good.
So Chris, you were out here in New Zealand for WWA, in 2003. Was that your first trip to New Zealand?

Yes, that was my first trip.

Have you been back here since then?

No actually I haven’t. But I would definitely like to.

You’ve got good memories of your time out here in New Zealand?

Yeah yeah it was cool. And I enjoyed seeing some of the countryside and stuff, it was really cool.

The match that you had out here was touted as one of the greatest of the year; how do you look back on that match?

Definitely as one of my favourite matches that I’ve had so far in wrestling. It was something that I’m definitely proud of, and just basically, really positive memories about it. 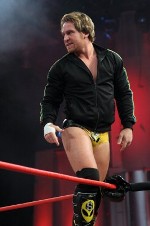 You were really young when you entered the industry; what’s it been like for you, being one of the youngest guys in this business?

It’s not a bad thing. Everyone’s young at some point, but I’m definitely very lucky to be where I am, being the age I’m at. I also just feel lucky that I’ve accomplished what I have accomplished in wrestling, and still be considered one of the young guys.
How do you look back on your time training with Scott D’Amore?

It was great. I learned pretty much everything I know from him. I’ve got some good memories of Scott beating me up pretty bad.

Oh really? Of beating you up?

Yeah yeah. But it was worth it.

Any memories in particular?

Ah, mostly just lots of scrapes and bruises. I don’t remember any specific story, but… I just remember all the drills and everything we had to do, it was pretty hard.
You came up through the industry with Petey Williams, and you’ve faced each other a number of times. Are there any matches with him that really stand out?

Ah, probably… I think the one that we actually had in Japan, I was able to work Petey for this promotion, they’re not around anymore, they were called Wrestle 8 Project in Japan. I got to work Petey over there, and it was one of the longest, and I think one of the best matches that we’ve had.
You’ve said that you wanted to be a wrestler your whole life, and you worked at Subway, to pay your way through wrestling school. Is professional wrestling all that you thought it would be?

Definitely not everything I thought it would be. You know, of course there’s unexpected stuff, but as a whole I’m definitely really happy with it.
Who were your heroes when you were growing up, who did you really look up to and admire?

Growing up, probably Hulk Hogan and Bret “The Hitman” Hart.
Did you have any idea at that time that you might work for WWE?

That was like my dream when I was a little kid, you know what I mean? That’s the main thing that I watched when I was little, was WWF, so mostly I just wanted to work for them. But as I got older I realised there was other stuff out there too.
Tell us what it was like working in the very first Ultimate X match.

It was pretty nerve-wracking, because they weren’t able to get the structure up until like, right before the show started, so we weren’t even able to go out and hang from the ropes. Like, we didn’t even touch the thing before we had to go do the match. So, we didn’t know what was going to happen, so we were nervous. But it ended up coming out pretty good, so we were happy with it.

So you didn’t even get to test out the strength of the cables?

It must have been pretty nerve-wracking the first time you got out there?

Yeah, we were really nervous, we weren’t sure what was going to happen, but luckily it all stayed together.
What do you think the chances are of TNA doing an entire pay-per-view for the Super X Cup Tournament?

I’d say the chances are mostly… not likely, because… I don’t know, they tried that before and it came out really good, I mean… but I don’t really see it happening.
If TNA were able to get an extra hour on Spike TV, who would you like to see brought into the X-Division?

I think the guy I would mostly like to see is for Jerry Lynn to be brought back into the X-Division, because … he still works there, he’s one of the agents or whatever, but still it’d be nice to see him back in the ring for TNA.

Any other guys from around the indy circuit, Ring Of Honor, places like that, Pro Wrestling Guerrillas? 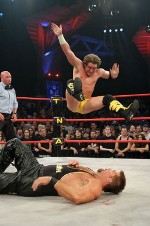 What’s it been like working with Kevin Nash, and the whole Paparazzi angle?

It was really cool, I had a really good time doing it all. It was really an honour to be able to work with someone like Kevin Nash, being who he is as far as the professional wrestling business goes, he’s been everywhere and done everything, you know? So it was really cool to learn from him and work with him.

Any memories that stand out from that angle, working with him?

Mostly just, probably just remembering seeing him for the first time, really sticking out in my head how big he actually is, because he’s ginormous.
What’s Jeff Jarrett been like to work for?

I think it’s really cool, I think Jim Cornette is one of the best talkers in the business. He just adds to TNA, does nothing but add, I think he’s great.
Smaller guys have been really making their mark on the industry in recent years. Who do you credit with really opening the door?

I credit the WCW Cruiserweight division, because they really brought that style of wrestling to the US. Guys like Benoit, Malenko, Guerrero, Mysterio, Juventud, all those guys, they put the spotlight on the younger guys.
With Bound For Glory set to be held in Detroit in the new arena, it’s creating a huge buzz. You must be getting really amped up about working in the big arena, in front of a big crowd?

How was it, working there the first time?

Oh, it was awesome, we packed that place, and it was really cool especially because it was TNA’s first house show. So it was good to see we had that many fans.

How many does it seat?

Um… I think like five, five or six thousand.

I guess it’ll be a nice change from the Impact Zone, hopefully nothing’ll catch on fire.

Where were you when the fire hit at Hard Justice?

I was in the locker room actually, and Sonjay came running in saying that there was a fire in the arena, so we came out and looked to see what was going on, and then everyone had to evacuate.

They handled it really well, have you watched it back on TV?

Yeah, I watched a little of it back. Yeah, I think they did the best they could with the situation they had.

Yeah, for sure.
Outside of TNA, do you have a favourite indy promotion that you’ve worked for?

Probably my favourite would be PWG, Pro Wrestling Guerrillas, out in Southern California. I work with those guys every month, and have the most fun up there.

Yeah, is there anyone else… Christopher Daniels works out there as well, doesn’t he? Or he did…

Yeah he lives out there, but he doesn’t really, he doesn’t work PWG shows a lot. He does some of them, but not a lot of them or anything.

Right, right. Is Christopher Daniels someone you’d like to spend more time in the ring with?

Yeah yeah definitely, definitely. I have a great time every time I work Christopher Daniels. Any time I’m going in there with him, I’m happy.
Is there anybody that you’d really like to work with, that you haven’t worked with yet? And this could be from anywhere.

Probably Dean Malenko, because he’s one of my favourite wrestlers, when I was watching, when he was in WCW and stuff, it was like… Dean Malenko was my favourite, so I’d like to have a match with him.
What’s something that fans would be surprised to learn about Chris Sabin?

Hmmm… I guess that I love cats. And I have three cats.

You have three cats – what are their names?

Well, no pun intended, but what does the future hold for Chris Sabin?

Right now I’m just focusing on, I have an X-Division title match at the next pay-per-view, No Surrender, so right now I’m just gonna be focused on that. I don’t want to think too far down the line, just keep to my short-term goals and see where that gets me.
Well Chris, thanks very much for your time, I really appreciate your taking the time to talk with us today.

And all the best for No Surrender and Bound For Glory.

Thank you, I appreciate it.