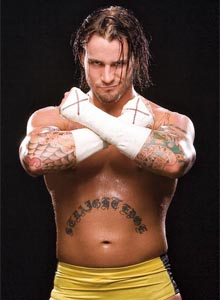 It was just over a month before CM Punk’s WrestleMania debut, where the Extreme Championship Wrestling star would feature in the Money in the Bank ladder match, the biggest match of his career.

Since then, Punk has gone on to capture the ECW Heavyweight Championship and become the backbone of the ECW brand.

His matches against former ECW Champion John Morrison have arguably put the brand on the map, with Punk continuing to be the face of the fledgling organisation.

In this interview, Punk discusses his being straightedge, his path into WWE, his relationship with Maria, injuries and much more.

You’re known as being “straightedge”. For the fans at home, what does that mean exactly?

Well that basically is three things; that’s no drugs, no drinking, no promiscuous sex. Which kind of makes me a nerd, but I’ve dealt with it all my life and it’s who I am, so, it’s things that aren’t me, you know? Not to say I’ve never done it; I’ve never done drugs, I’ve had a couple of drinks when I was like 14 or 15… I never understood getting so drunk, not remembering the next day or what you did or who you did it with. I could always just have fun without drinking, so…

You were a big star in the independent scene of course, before you came into the WWE; what path did you take to getting into World Wrestling Entertainment?

Heh… I was bored, believe it or not. That’s the most base, simple answer I can give you. I had pretty much done everything; I had wrestled for everybody that was worth wrestling for… I was making decent money, without having a “real life” job, as we like to call it, and WWE actually called me, for tryouts and stuff like that, and I told them I’d hold off for a couple of months, because if I really wanted to make a go of it, I was going to get new gear, I was going to get into better shape. And I did just that, and I called them back up, got some tryouts, and I got hired, like that [snaps fingers].

And now that you’re here in WWE, is it everything you thought it would be?

Yeah, I think it’s everything and more, you know? I mean, what a difference a year makes. Last year, I was still down in OVW, which is the developmental territory for WWE, and I was at WrestleMania in my hometown, but I wasn’t really involved in the show, I was doing extra work; I came out as one of John Cena’s Chicago Al Capone-style thugs, and now this year, I’m in the Money In The Bank Ladder Match. So that’s a pretty big deal, so… it’s pretty cool, like everything that I thought it would be… there’s some pitfalls, you know? But I pride myself on working hard, and overcoming obstacles. So, so far so good. I got no complaints. 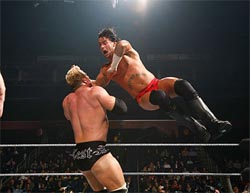 You’re part of the ECW roster, and of course that’s the new ECW, rebuilding that brand up; is that incredibly challenging? How’s that going for you?

I think it’s challenging because you’re balancing new fans who’ve never seen ECW, and then there’s the old fans who… the ECW fans are some of the best fans in the world. They take it very personally when you maybe do something that’s not ECW, or like if there’s a disqualification in the match… if you’re not allowed to use chairs, stuff like that. So it’s hard balancing those fans. There’s fans that never saw it in 1996, when Sabu was crashing through tables and nobody’d ever seen that before, there’s fans who’ve never seen Rob Van Dam and how athletic he is, and off the wall he can be, but then there’s the old fans that have seen that, and maybe they think the new ECW’s a little bit more toned down. But if we try to give them all that old ECW, day in and day out, we’d probably all be laid up in a hospital somewhere. You know? But I think that’s really the only challenge, is to keep the old fans happy, while making new fans.

Your real-life girlfriend is WWE Diva Maria; you guys are on different rosters though, are you passing ships in the night?

Pretty much. When we’re at home, I think we have one full day together. Depending on what the schedule is; if there’s a pay-per-view weekend and neither her or I are on the pay-per-view, we got a couple of days, but passing ships in the night is a good way to describe it. But honestly, I’d have it no other way. I mean I always put the business before any of my relationships, I could write a book on how to destroy a relationship. And this time, it’s actually a little bit easier because she understands the business, she’s in it too. There’s times when she’s got to miss out on stuff that I’d want to do, or an important day for me, and I totally understand. And I don’t care, because I do the same thing. So it’s a two way street, and in my opinion it’s a great relationship because we both understand, we both know that this is right now, we’re putting this ahead of most everything else so we can make money, maybe buy a house, basically just looking to the future – [laughs] – it is rather funny that we’re on two different shows, but I think the time apart actually helps it along.

A lot of people don’t realise that you get some quite serious injuries in this business; what’s the worst injury you’ve ever had?

Worst injury I’ve ever had was a fractured skull. And I fractured my skull – I think it was on this side – I’ve got a nice little crack that runs down through my temple. Cracked my skull, and I kept wrestling for another 8 to 10 minutes, something like that, and during that time somehow my spinal column filled with blood – don’t ask me how – I just thought I had a really bad headache, maybe a concussion. Everyone else called an ambulance, I started throwing up, I couldn’t get up, I couldn’t open my eyes… took me to the hospital and the doctor told me I had a fractured skull. He actually told me, he’s seen lesser fractures, he’s seen people die from them. And he was more concerned about my spinal column filling with blood. Which, I don’t… it’s funny to me now, but I guess it’s pretty serious, and I was messed up for quite a while, but I actually returned to the ring in two short months.

You’ve got your first WrestleMania coming up as a performer; what aspirations do you have for that?

I recently did a WrestleMania press conference in Canada, and Hillbilly Jim was there, and he talked about career-defining moments. And he talked about WrestleMania 3, himself, and his tag team partner against King Kong Bundy and his tag team partner – the famous match where King Kong Bundy smashed the midget – and he said that was a career-defining moment, because wherever he goes, whatever country, and no matter how old the people are or how long it’s been since that moment, people will always ask him about that. So I would definitely say that I’m going to do my best to have a career-defining moment, something that pretty much makes me. People won’t be able to deny me after this, and probably until I’m 50 years old, people will be asking me about it, so all’s I know is there’s going to be a ladder involved, and its going to be pretty insane.

Well CM Punk we know you’ve got a big match tonight, so we’ll let you go and prepare. Thanks very much for your time.

He never had a chance. Not in the fight, anyway. But that's not the point, is it? That's why he...