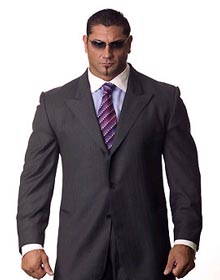 Batista had recently captured the World Heavyweight Championship against King Booker at Survivor Series 2006 and was preparing to take on Mr. Kennedy later that night in Christchurch with the title on the line.

Batista was also preparing to face The Undertaker at Wrestlemania 23, a match that he would go on to lose.

In this interview, Batista talks about his upcoming match with The Undertaker, New Zealand, rivalry between brands the pressure of being World Heavyweight Champion and more!

Batista: [chuckles] Huge challenge. A dream come true for me and also, this will be my third WrestleMania and my second main event, so I’m quite privileged.

Do you think that this match-up with the Undertaker has the potential to take you from respected champion into legend?

Um… it’s one of those things where you know, Taker is – I mean, he’s a phenomenon, he’s been around for a long time, he’s a legend in this business. He’s kind of a household name I think, even people who don’t watch wrestling regularly know who guys like the Rock are, they know who Stone Cold is, they know who the Undertaker is. So it’s one of those things with me being in the main event with the Undertaker, it’s a win-win situation for me, you know? Out of pride, I want to go in and retain my World Heavyweight Championship, but honestly it’s just going to bring me to a different level.

You’re becoming quite a regular to our shores; have you ever had a good chance to have a look around, or are you always busy with media?

[laughs] Usually no, it’s kind of a shame. We travel the world and it sounds very glamorous, but a lot of times we see hotels and arenas and airports. But I’ve gotten a chance to get out a little bit here, and this is actually a good weekend for us, because tomorrow we fly into Auckland but we have all day to sleep, and the Sunday we don’t fly out till later in the afternoon, so we’ll get to go out and experience the night life a little bit, get out and meet people.

You’ve travelled down here with the guys from ECW; is there any rivalry between the brands?

Is there a lot of pressure on you holding that World Heavyweight Championship belt?

Oh, tons [laughs]. Tons, I mean I don’t even sleep much anymore, there’s nothing but pressure. But it’s something I really feel like, I was groomed for it. I was raised to hold this.

Well you won that title belt back at Survivor Series against King Booker; how did it feel to get it back?

Can you describe the feeling of performing in front of thousands of fans? What’s that like?

No. No. Honestly, I try to but it’s just, it’s something that you can’t really put into words, and when I do try to describe it, it still doesn’t seem like it’s enough, I don’t think people could really know what it feels like unless they actually go out there and do it. And I always tell people, it’s as close as an athlete can get to being a rock star. But I think it’s even so much more than that, because when you’ve really got the crowd in the palm of your hand, you’re really just feeding off of them and they’re feeding off you, and your adrenaline is just spiking… I mean you’re exhausted, but you’re just running on adrenaline, it’s something you really can’t put it into words.

When you come to a place like New Zealand, do you find that the international fans react differently to you?

Yeah. A lot of times I think, in general, when we travel overseas, they just don’t get a chance as much live. So I think they’re usually a lot more amped, a lot more pumped up than American audiences. You know, we make our tours around the United States, sometimes we’re in certain states five or six times a year, so they get to see us a lot more often. We just don’t travel about as much… so I think they’re definitely always more amped up. And that’s such a thrill for us because that’s what we live for.

There’s a lot of young guys coming through the WWE now in all of the brands; is there anyone that you really think’s got that… the potential to knock you off your perch one day?

Yeah, well… knock me off my perch… [laughs]… well I’ll tell ya, I say this all the time, but Mr Kennedy just jumps right into my head. He’s, I think, something that the business has been missing for a while. He’s just got that “it” factor, the kid’s  star. You know, you look at him, and he’s not a particularly big guy, doesn’t have all these great qualities about him that make him stand out, he doesn’t walk into a room and you think “oh that guy’s a star” but as soon as he starts wrestling, and especially, as soon as he picks up a microphone, as soon as he starts speaking, he sucks you in. I mean, he’s just got it. He’s really got it, I think he’s going to go far in this business.

Actually I’m competing against Mr. Kennedy tonight, so [laughs] he’s good but he’s not that good. Thank you.