It was NZPWI’s privilege on Thursday morning to speak to WWE Diva Maria.

From ditzy backstage interviewer to no-nonsense in-ring competitor, Maria has proven herself to be one of WWE’s most versatile Divas. Her beauty and charm belie a tough attitude and fierce determination.

Trained under the watchful eye of Finlay in OVW, Maria has proven herself adept at taking on all comers, and now has her eye firmly fixed on the as-yet unattainable prize – the WWE Diva’s Championship.

Maria took time out to chat with NZPWI Editor Kirsty Quested about the evolution of her character, the Playboy shoot, Tribute to the Troops and much more!

Kirsty Quested: Hi Maria, how are you?

Maria: I am fabulous, how are you?

So, what made you decide to get involved in professional wrestling?

Hmm. I was interested in it when I was growing up. I watched Hulk Hogan, and I just thought that they had so much fun out there. And then, when I got a little older, I watched the Hardy Boyz. And Lita. And Trish Stratus. And of course I thought The Rock was hot, so when I saw the Diva Search I decided to enter. 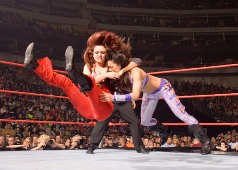 Take us back to your training, because it’s been an ongoing process for you – has it been harder than you thought it would be?

It was hard. You know, I never had a level of what the training would be like. It’s not any harder than I thought it would be, but it is difficult. And it is an on-going process. Because I was an interviewer, I didn’t have as many matches early on in my career. For the first few years that I was with WWE, basically, what I did was interview. And then from there, I had a lot of time where I came out with Santino. Not until, really, I moved to SmackDown have I had matches every single week.

You’ve come a long way from the backstage interviewer we were all introduced to. Who do you credit that evolution to?

Oh gosh, a whole number of people. Mickie James worked with me a lot when I was down in Ohio Valley Wrestling. I worked with Beth Phoenix so much when I first started having matches, and she is an incredible wrestler, and definitely someone that is intimidating. Since I moved over to SmackDown I’ve really enjoyed working with Michelle, enjoyed working with Natalya, and Victoria is such a great mentor as well. Fit Finlay, he does a lot of our matches, and worked with us a lot, so it’s a whole bunch of people.

What were your thoughts on the way that you were originally cast; you know, as a bit of a ditz?

[laughs] I enjoyed it. I always enjoyed it. It’s great. You know, we constantly say things or do things that we don’t want to do, or accidentally say, we have these ditzy moments. You know? And that’s OK! And it was just kind of an extension of that, of having those moments where you’re like “oh no! Why did I say that?” So it’s just, it’s fun, and I still have fun with it.

So, what was the main factor that saw you move into the take-no-shit Diva that we see today?

[laughs] You know, I think it’s just me fighting for getting in the ring more. I always wanted to, from the very beginning, but I never had that opportunity, and I kept asking, you know, “can I please go on the road and wrestle, can I please do a match on TV, can I do something!” and finally, they started to give it to me.

The Playboy shoot – can you tell us what was the most surprising thing about that, about the shoot itself? Did you go there and it was like “oh, I wasn’t expecting that!”

I was fine – no, not at all. I was completely comfortable and confident. And to me, I was like “all right! I am woman, hear me roar! I’m here, I’m doin’ my thing!” I completely, I enjoyed it, they treated me wonderfully.

Now the rumours are, if I have this right, that you create all your own outfits. Is that true?

I create a lot of them. Not all, because we travel so many days out of the year that I’m not able to create every single thing that I wear. But I would love to. And if I had that opportunity, great. But, I do create a lot of my outfits.

Aside from the in-ring action, what has been the best aspect of being involved with WWE?

You know what, just coming out. As soon as I step through the curtain, it’s like, this adrenaline rush just hits you. It’s empowering. And it’s so much fun. The fans are just absolutely amazing, and it’s like changing into a new person, every time I come through that curtain, it’s just wonderful.

You’ve been part of the Tribute to the Troops a few times now. Can you give us some idea of what it’s been like, traveling to dangerous places and talking to the men and women involved over there?

Definitely. This is my fourth time, going on a Tribute to the Troops tour, and WWE has been doing it for six years. To go to these places – and WWE works with over 130 different bases around the world, different hospitals and military places that they have – and to go out there, and to do the Tribute to the Troops, it’s just a huge undertaking, it’s a huge event. We go over there on a C-17 – our ring, our luggage, our gear, producers, our cameramen, our directors, all of the Superstars and Divas are on the plane together.

Yeah, it’s crazy! And then when we get over there, we set up the ring, and all of us, four different groups, and three groups this year went out into all the different foreign operating bases, so we’re touring bases that nobody else will go to. Because it’s that far out there. In the action.

I haven’t been really involved in one of the groups that got mortared, or anything like that, so I haven’t really been that scared, but I do know there’s been times that it’s been very scary. But in the end, it is so nice to see the guys get excited, and to get happy, and they’re part of our show, they’re part of the Tribute to the Troops. It’s amazing, because their parents they can watch, they can watch it this year on NBC on December 20th, and the parents can see some of their sons and daughters, so it’s a great thing.

It is, it’s really awesome. 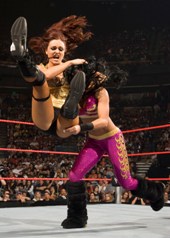 There seems to have been a shift in the tone of women’s wrestling lately in WWE, and you’ve been a major part of that. What do you think has contributed most to women in WWE being seen as competitive athletes rather than just eye candy?

Hmmm. Well, the women, every single year, or month, even day sometimes, are improving. We’re changing, we’re evolving. We’ve been more out in the public eye, we’ve been doing things like fund raise, me and Eve did a magic show together, or we’ve walked the red carpet more often. We’re doing more and more with the troops, and with charity groups and charity events. So we’re showing a different side of the WWE, and especially the Divas, because there’s always one, or there’s two of us going out and doing these things. So, we’re showing that different side. And it’s helping. And plus, we’ve had, we have some great wrestlers in the ring, and a lot of them are people we can learn from, whether it be Victoria, or you’ve got Beth Phoenix who’s been wrestling for a very long time, to Mickie James who’s also been wrestling for a very long time. So there’s a lot of different aspects. Everybody brings something different to the table, and everybody’s background is so diverse that I think it’s still a greater Divas’ brand.

What is something fans would be surprised to learn about Maria?

Hmmm. I would say I can touch my tongue to my nose but I think everybody knows that! [laughs] I am very much a homebody. When it comes to, when I’m home and having a couple of days off, I like to be on a little place called Couch Island, and I just basically stay there! [laughs] And I’m not a huge fan of like… uh, I don’t even know how to describe them, I’m not a huge fan of comedy movies, or like, the humour and stuff like that, I’m more or less love sci-fi – Star Wars and Lord of the Rings, and I loved Twilight, so more of the sci-fi stuff.

Now Maria, you’re on SmackDown. These interviews that we’re doing are supposed to be promoting the Raw tour to New Zealand in July.

That I’m talking to you, is this a hint of a draft pick in the future?

[laughs] I don’t know, we’ll have to see! You know it’s so funny, we don’t know what we’re doing from day to day, so maybe they know more than me and they just kind of put me on it, so I don’t know. [laughs]

Have you ever been out here to New Zealand?

I’ve never been on the New Zealand or the Australian tour, which is so funny to me, because I spent a month and a half over there when I was shooting Outback Jack.

And finally, what does the future hold for you Maria?

Hmmm. Hopefully the Divas Championship. I’ve been fightin’ for that thing ever since I moved to SmackDown. But beyond that, I definitely would love to do one of the WWE films. I’m trying to get my feet wet in the music, and creating an album, and creating something really great. And of course, fashion is always a huge passion of mine. I definitely want to start something like that. And I have been working gradually towards it, it’s just that our schedule is very hard to do outside projects. But you never know what can actually pop up, so I’m excited for the future.

Well, thank you so much for your time today, we really appreciate it, and who knows – hopefully we’ll be seeing you out here in New Zealand sometime soon.

I hope so as well!

It was NZPWI’s privilege on Friday morning to speak to the WWE Women’s Champion, the Glamazon, Beth Phoenix. Having wrestled...