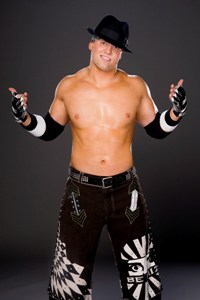 Self-proclaimed awesome chick-magnet The Miz says he’s looking forward to returning to New Zealand with Raw, citing the very entertaining match he and John Morrison had in front of New Zealand fans when they took on Finlay and Hornswoggle during last year’s SmackDown/ECW tour.

No stranger to TV before his WWE debut, The Miz first laced up his boots for WWE’s reality TV show, Tough Enough. Going on to train in the then-WWE developmental territories, OVW and DSW, The Miz debuted on WWE as the host of the 2006 Diva Search. Since then he has gone on to become one half of WWE’s most successful tag teams with John Morrison, taking out the WWE Tag Team Championship and co-hosting the very popular The Dirt Sheet talk show on WWE.com.

Drafted to Raw as a singles wrestler earlier this year, The Miz well and truly has his work cut out for him as he takes on former WWE Champion John Cena, on the mike as well as in the ring.

Oh. Well you’re in for a rough shock when you come over here next week, it’s freezing cold.

[long pause] Are you kidding?

Um… really cold, as in, if it were an outdoor show, you guys would be ice blocks.

[long pause] Really?! So I should bring a jacket?

Sure you do, look, the fans are awesome… 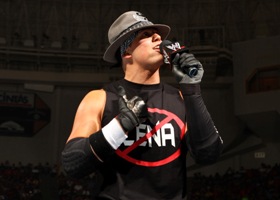 Well, now, you have been out to New Zealand before, with the SmackDown/ECW tour, and this year you’re coming out with Raw… how’ve you found life on the flagship brand?

So far so good, I can’t complain… I mean I think I’ve not only impressed myself, but I’ve impressed the WWE Universe, because, well… I don’t think that anyone thought I would come out and start calling out John Cena, especially for two months, and then actually have eight victories over him. Granted, most people say they are cheap victories and I never really won, but the fact is, Cena’s been scared of me. Finally, I’m getting my shot at The Bash, which I plan on not only winning, but making an impact. And hopefully, everything will go my way.

Well, yeah. It’s been a really interesting transition for you, into singles wrestling, straight into this thing with John Cena… how are you preparing for The Bash?

Basically, mentally and physically, I’m preparing any which way possible. I’ve been working out a lot more, a lot more cardio, so I can last a lot longer, and been studying up on John Cena’s matches, if you will, see what I can do to transition some of his counters.

Awesome. You and John Morrison were undoubtedly one of the success stories in terms of tag team wrestling in WWE – how do you look back on your time as part of Miz and Morrison?

I was there for that match, it was great.

… Europe, North America, I’ve been everywhere all over the world, and you guys in Australia are absolutely so much fun. I can’t believe how into it you guys are…

…and being with Morrison, it was fun, it was great, and The Dirt Sheet was just so much fun to do, our matches were incredible, and I think we got to a point where got so far up, we had no more competition. And we realised that we needed to go single, or else we’re just gonna stay as a tag, and granted we were great at tag, but we weren’t wrestling anybody. We wanted to wrestle the names, we didn’t want to just be “Miz & Morrison”. I wanted to be the top guy, I wanted to be the poster child of WWE. When you think of Raw, I wanted you to see my face. So that’s basically where I’m at right now.

Well, you’re getting a lot of mike time which is always and encouraging sign, and you had a lot of success when you were with Morrison with The Dirt Sheet; so should we be expecting a Miz talk show on Raw in the future?

Well you never know. You know, I did have a talk show before, there was Miz & Morrison and The Dirt Sheet, and I had Miz TV… but that got cancelled after two shows… so you never know, I mean if they want to give me a talk show I have no problem doing it, I’ll be the next Conan O’Brien. 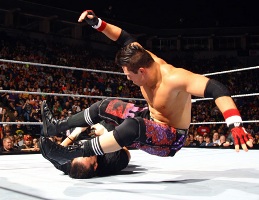 You trained in both of WWE’s old developmental territories, Ohio Valley and Deep South; how do you look back on that time of training? Is there a group of guys that you’re still in touch with that you went through all that with?

It’s funny, a lot of guys from Deep South, have all either gotten let go, I mean there’s only… who there is still left… I think Mike Knox, myself and MVP are the only three people left in WWE from Deep South. And as far as Ohio Valley Wrestling goes, I was there for about six months, and CM Punk was there when I was there… and I don’t even know who else was there when I was there, but yeah, it’s interesting to see who actually comes up, and who does well. Just because you do well in developmental doesn’t automatically mean you’re going to do well in the WWE, you really have to work for it. And as hard as developmental was, WWE is twenty times harder, just because of all the traveling we do. And all the work that’s involved with not only making your character… you gotta make your character so people want to see him. If people don’t like you, then people don’t want to see you, so you have to make something interesting about yourself, so that people really want to see you get your butt whipped.

You mentioned before that a lot of those guys that you came up with have been let go; there’ve been a few releases from WWE lately and they seem to go in cycles – have you been surprised about any of those that have been let go lately?

Um… yeah a little bit. Candice Michelle was a little shocking. And then Mr. Kennedy and Umaga… those were really shocking, just because those guys seemed to be doing really great. And I just wish them the best of luck, hopefully they can do well wherever they go. But right now I’m just concentrating on me, I’m not worried about people getting let go. The more people who get let go, the better I get to be. More time for me on Raw. [evil laugh]

You debuted in WWE…

How mean am I?

Well… going back to the start, you know you debuted in WWE in an interesting way, hosting the Diva Search. Was that how you imagined you’d kick off your WWE career?

No, actually. When they said to me, “We want you to be the Ryan Seacrest of the WWE,” I went “What?!” and they go “Yeah, you’re going to be the Ryan Seacrest, it’ll be great.” And literally I took that as, I get the microphone. So as long as I get the microphone, I really think that I can make anything work. And I think I did, I think I parlayed it enough to where people wanted to see what I would do in the ring. And that’s what happened, and here I am today, main-eventing The Bash with John Cena. 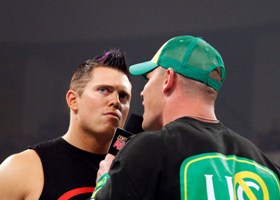 Well you know, a lot of people have gotten to see you, you’ve been part of the roster on all three brands now. How would you compare your experience on all three?

SmackDown was great, it was a huge learning experience for me. I was brand new, I was so green at everything, and had no idea what I was getting into. ECW allowed me to start developing my character, to start really getting a feel for who I am as a wrestler, who I am as a mouthpiece, and where I want to go. And I spent about a year and a half on ECW, and it really gave me that staple to where I was so confident and ready to go, that I was ready to make the move to Raw. And now being on Raw, I couldn’t be happier. I mean, I have gotten to do things that nobody has been able to do. I’ve been able to tell Cena, you know, he always says “You can’t see me,” and “You’re right, I can’t see you, because your movies aren’t in theatres long enough,” I mean, how many people have ever said something like that, and have had no repercussions? Like Cena, I’ve been saying stuff about Cena, I made fun of his rap album, called him a “sell-out corporate brown-noser”, called him the next Hannah Montana, and yet he has done absolutely nothing, and I’ve said I’m 8-0 against him, I’m undefeated, and he has done nothing, and finally, I’m getting my wish. I finally have – I don’t know – I got a hold of his attention, to where he said finally he’s going to wrestle me, at The Bash, and he says he’s going to kill me, but I got some stuff up my sleeve that I think’ll… that’s going to shock him.

So you’re not concerned about the fact that Cena may have been saving some of this stuff up, and the repercussions could be a bit nasty?

What would you tell somebody who’s never seen WWE live before, there’s going to be probably a whole lot of fans out here in New Zealand who’ve never been to a live WWE show; what can they expect?

What can they expect? This is one of my favourite questions, ‘cause it’s so funny… like, my friends, will always say like… I’ll say, “Come to a live event,” and they’re “Ah, I don’t know, I haven’t watched wrestling in so long, since I was a kid, I really don’t know what it’s like anymore,” and I go “Come to one live event, I guarantee you’ll be hooked.” They’ll come to the live event – reluctantly – and they will leave the biggest fans. Now, literally, every time I have a show in Los Angeles, or anywhere where my friends, are, they’re all calling me: “Listen, can I get tickets, where do I get tickets, what do I gotta do, this is the best stuff ever,” because, WWE live events are like a rock concert. Like a soap opera. Like an improv comedy show. And, all that wrapped into one. And it’s athleticism. You’ll see some of the most incredible moves that you’ve ever seen in your life. And also, you’ll be able to laugh. We encourage our fans to cheer and boo whoever you like and dislike. I mean, how many places tell you to do that. Tell you “Boo that guy if you want to, tell him all you want.” And it’s just so much fun.

Well Miz it has been awesome talking to you, thank you very much for your time, and we’re just really looking forward to seeing you all out here next week.

Thank you very much, I can’t wait for you to see me as well.

Would you like to see The Miz live in action on July 3? NZPWI in association with WWE is giving away a double pass to Raw’s live show at Vector Arena. All you have to do is answer this question: Who was The Miz’s tag team partner when they won the WWE Tag Team Championship in 2007? Email your answer to and you’re in the draw. Don’t forget to include your full name and a contact phone number. Results will be announced on NZPWI on July 1.