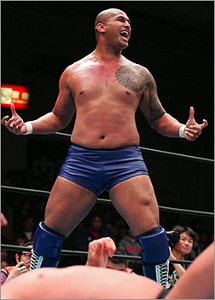 He’s right. I hadn’t heard of King Fale until a few months ago, yet he’s been a regular with NJPW – the oldest active promotion in Japan – for over a year now.

And he’s a New Zealander.

With that in mind, I caught up with King Fale to hear his story – how he wound up in Japan, and what life is like for a gaijin in the world of puroresu.

King Fale was born in Tonga but moved to New Zealand at age six in 1988.

“It was hard at first but much better in terms of education and lifestyle,” Fale says.

Part of that lifestyle was rugby, which Fale played with his friends throughout his school years in South Auckland.

“Like most kids in New Zealand we all wanted to be an All Black,” he says.

The All Black dream didn’t pan out, but Fale made enough of a name for himself that he was offered a scholarship to play university-level rugby in Japan when he finished college.

He jumped at the chance.

However, shortly after relocating to Japan to play New Zealand’s national game, a nagging injury flared up once again and forced Fale into early retirement from rugby in 2008.

With no reason to stay in Japan, Fale decided to return to New Zealand.

But a friend convinced him there may have been another opportunity waiting for him in Japan.

“I had a friend who was a sumo wrestler. When he heard I finished from rugby, he asked me to join him when he tried out for New Japan [Pro Wrestling],” Fale says.

Fale had been a big wrestling fan as a child, and saw an opportunity to take after the likes of King Haku, The Barbarian, The Hart Foundation and Diesel, who he had grown up watching.

“I thought it would be fun and sent my application in not knowing anything about [Japanese] wrestling or the company I was gonna trial for,” he says.

“Three days later I got the news they wanted to take me on,” he says.

Fale began training in the New Japan dojo immediately, and made his debut after 10 months in a losing effort against Manabu Nakanishi at the Korakuen Hall – Japan’s equivalent of Madison Square Garden.

“It’s very different compared to what I grew up watching,” says Fale of the Japanese style of wrestling.

“Japan is more into the technical side. The fans are very difficult to get on your side, especially when you’re a foreigner!”

The Japanese crowds have warmed to Fale in recent months though, perhaps due to his hard-hitting in-ring style.

“It’s taken a while to figure out my style, and I’m still trying, but I’ve used my size to develop what they call the strong style: Just being rough, tough and wild.”

A typical day for Fale involves breakfast at 8am before heading out to the NJPW dojo for training from 9.30am until 12pm, getting a mix of cardio, weight training and in-ring workouts.

After lunch Fale hits the gym for a couple of hours in the afternoon before he meets up with friends for dinner and “a few beers”.

Friends like Prince Devitt and “Machine Gun” Karl Anderson, who Fale lives with.

“They and Giant Bernard have helped me so much in becoming a wrestler,” Fale says of his housemates.

Once a week Fale and other gaijin, or foreign, wrestlers in the area get together for dinner.

“This is how I got to know MVP and other wrestlers that come to New Japan,” he says.

The team wrestled Giant Bernard, Karl Anderson and Jushin “Thunder” Liger in a prelude match before taking on Togi Makabe, Satoshi Kojima and Tomoaki Honma in a second round bout.

The trio came up short both times, but the losses haven’t stopped King Fale from stepping in the ring with some of Japan’s biggest names, including Lance Archer, MVP, Masato Tanaka, TAKA Michinoku and Yuji Nagata.

“At the moment I would like to work with everyone,” says Fale of his multitude of opponents.

“I’m still on the learning mode, so working with different styles really helps me to develop.”

Most gaijins visit Japan to gain experience before returning to their home countries, but for a foreigner whose entire career has been in NJPW, will King Fale stay in Japan?

“I’m still not sure of where I want to be in the future. However, I would love to get experience abroad,” he says.

“At some point in the future I will return to NZ.”

If Fale does come back home, or move on to another wrestling scene, he’ll take with him a wealth of connections having made positive impressions on his NJPW colleagues.

“I have nothing but good things to say about Fale,” MVP says. “He’s a good guy!”

New Zealand fans may not know much about Japanese wrestling, but if he has his way, they’ll know a lot about King Fale in the years to come.