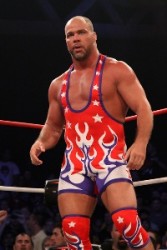 It takes Kurt Angle a minute or two to get to the phone. “My house is flooded,” he says by way of explanation when we’re finally connected. “And I’ve got these builders here, and I’m looking after the baby. It’s been atrocious!” I thank Kurt for taking the time to chat with me with all he’s got going on. “Yeah, you’ve got two minutes,” he jokes, and I sense that despite the domestic crises, he’s in a pretty good mood.

Twenty minutes later his ebullience remains undiminished. This is the first time I’ve spoken to Kurt, but the energy and vitality that I’ve associated with him for years while watching him perform is apparent even while fulfilling what must be a somewhat dreary chore – media spots.

Media is a necessary part of any entertainer’s life, especially when there’s something big coming up. The most anticipated event on TNA’s calendar, Bound For Glory, is looming. And on October 16, the TNA World Champion, Kurt Angle, will put his title on the line against Bobby Roode, a man who has ascended to the pinnacles of tag team competition and has now worked his way up to the main event of singles wrestling. And at TNA’s biggest pay-per-view of the year, no less.

There is little doubt that Kurt is looking forward to the match. Throughout our interview, he puts Roode over hard. “Bobby Roode is one of the most talented wrestlers I’ve seen in years,” he says. “Usually I’m supposed to trash-talk him, but it’s kinda hard to trash-talk Bobby Roode. He’s that good.” I ask him what fans can expect from this much-anticipated match. 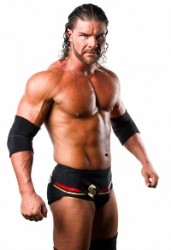 “You know what? I have had five star matches my whole career,” he says. No-one who has followed Kurt’s career is left in any doubt of this. “And what I see in Bobby Roode is a talent that can go as far as he wants to go. I’m talking about Shawn Michaels. I’m talking about Chris Benoit, Eddie Guerrero, Triple H. Bobby has something about him that could make him a huge superstar. Now, at Bound For Glory, that doesn’t mean he’s going to win. I can guarantee the match won’t be short. And I can guarantee that it will be very competitive.”

Also headlining Bound For Glory is the clash of the icons – Hulk Hogan vs. Sting. I ask Kurt which match the fans will be talking about after the event, and he roars with scornful laughter. “Oh come on. Come on, are you serious?” He chuckles some more. “Hulk Hogan’s wrestled Sting so many times already. It’ll help the pay-per-view, but fans are more interested in what’s going to happen between Kurt Angle and Bobby Roode,” he says. “I hope that we go on last, because it won’t be good for them if they have to follow us. Kurt Angle and Bobby Roode will be putting on a hell of a performance.”

I agree that I wouldn’t want to follow Kurt and Bobby, especially since Kurt says he expects the match to go at least 40 minutes. After a short pause, he then says something you almost never hear from a top tier star. And it certainly gives me a start. “This is hard for me to say. I have been consistently ranked as one of the best wrestlers in the world for the last decade, but Bobby Roode is better than I am right now. He really is that good.”

Kurt Angle became a household name before his success in pro-wrestling. As anyone who has not been living under a rock, on Mars, with their fingers stuck in their ears knows, Kurt was a top level amateur wrestler before turning pro. He won a gold medal in freestyle wrestling at the 1995 World Wrestling Championships, and followed it up with a gold medal at the 1996 Summer Olympics in Atlanta. And he did it with a broken neck. Now 43 years old, Kurt’s thoughts have turned again to where it all started for him. When I ask him about the pressure of headlining TNA’s biggest pay-per-view, he confirms that he is, once again, setting his sights on Olympic gold. 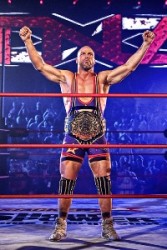 Amateur wrestling is a very different kettle of fish from pro wrestling. How does TNA’s top star manage to juggle his commitment to TNA with the training that’s needed to make it onto the Olympic squad?

“Thank God TNA gave me a lot of time off to train,” he reveals. “I have been home for three weeks now, training solely for the Olympics. I’ll be at my best when the Olympic trials come around. I feel good. I’m healthy, there’s nothing that’s going to hold me back. I know there’s one guy in my weight class that I have to beat – the number one guy – his name is Jake Varner, he’s a world silver medallist. But I’m very serious about making the Olympic team. I love professional wrestling, I love TNA, but I’ve always wanted to do something that no-one’s ever done, and to win an Olympic medal at the age of 43 is far beyond anything anyone’s done before.”

The discussion returns to TNA. While undoubtedly second only to WWE in popularity, TNA has not been without its share of controversy. Debate surrounding the wisdom of hiring Eric Bischoff, Hulk Hogan and – most notably – Vince Russo, continues to swirl among the international wrestling community. Many believe Russo and Bischoff to be creative and booking geniuses. Others see them, combined with Hogan, as the architects of WCW’s doom, who will inevitably send TNA in the same direction. But when asked about both the positive and negative developments he has seen TNA through in the years he has been with them, Kurt’s analysis is both surprising and succinct.

“The best development is that we’ve got a lot of our own homegrown talent. The worst is that we’re not growing them fast enough, or pushing them hard enough,” he states. “You’ve got Samoa Joe. He had been undefeated. I walked in and beat him on my first match. I didn’t like that. Then I had AJ Styles, and he went to main event status. Then they backed off from him. Then we’ve got Beer Money – James Storm and Robert Roode deserve to be main event status. We have Crimson and Amazing Red – we have all this talent, that’s never been touched. We need to elevate that talent. And you know who can do it? Me. And the other older talent. I’m not going to lie to you – I’m only going to be wrestling for three more years. Then I’m retiring. My job is to get this young talent to replace Kurt Angle.”

I tell Kurt I’m surprised that he’s talking about the guys who will eventually take over from him, whilst agreeing that TNA has a wealth of young, native talent they are not exploiting. “I am the top guy in TNA. I’m the top guy right now,” he says. “There’s not as much politics in TNA as there are in WWE, so a lot of what I say gets listened to. And I’m telling everybody – we’re getting old. We need young talent, so that when we leave – when Ric Flair and Hulk Hogan and Sting and Kurt Angle – when we leave, they’ll be there to replace us. And they need to replace us before we leave. That’s my goal. And if Bobby Roode doesn’t replace Kurt Angle in the next year or so, then we’re in trouble.”

I’m amazed to hear Kurt talking this way. The business is famous for pushing talent whose best years are behind them, and there are endless stories of guys who should have hung up their boots long ago but continue to snatch at main event spots at the expense of younger, more talented members of the roster. It is almost unheard of for someone of Kurt Angle’s status to be talking how best to replace himself – or even that he can be replaced. But Kurt’s absolutely sure of himself. And he has a very clear idea of how to proceed. 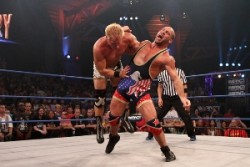 “I’m going to be with TNA forever. I won’t be wrestling, but I will be there,” he says. “I will be involved in the creative direction, training and development. And I want TNA to understand that we have a lot of homegrown talent that I think is better than the talent over in WWE. So why aren’t we using these guys, when they’re that good? The older guys – Ric Flair, Hulk Hogan, Jeff Jarrett, Sting, Kurt Angle – the list goes on. Guys in their 40s, 50s and 60s. It’s time to let the younger talent shine through. If we do that, then we’re a new company. We’ll get higher ratings, and we can compete with the monster, WWE.”

So what about that young, homegrown talent? Who among the young crowd does Kurt Angle see as the future of the business – who does he see following in his footsteps?

“James Storm is just as good as Bobby Roode,” he says, referring to Roode’s Beer Money tag team partner. “AJ Styles – he was our hottest guy a year ago. He needs to be pushed back to the top. Samoa Joe – one of the most versatile wrestlers in the world today. We need to bring him back. Crimson – we need to use his talents. I had an incredible match with him. There’s a little guy called Amazing Red – he’s even better than Rey Mysterio. I need to take a back seat to these guys over the next three years, and let these guys take over.”

TNA’s media relations person jumps in at this point and asks me to wrap things up. I feel we’ve come quite some way in a short space of time, but to bring things to a close I return to the original topic – the upcoming Bound For Glory pay-per-view. And it is clear that even with his intense Olympic training and his plans for TNA’s future, Kurt has not lost sight of his upcoming title defence against Bobby Roode. And although I should be expecting it by now, I’m still surprised when he finishes off by once again praising his young rival, insisting that at Bound For Glory, fans are in for a special treat.

“I think that we are going to have the match of the century,” he says. “I think it’ll be as good as – if not better – than Shawn Michaels vs. Kurt Angle, Chris Benoit vs. Kurt Angle, or Eddie Guerrero vs. Kurt Angle. Bobby Roode is that good.”

I thank Kurt for his time and wish him all the best for the show, and for the 2012 Olympics.

“The Olympics? Honey, don’t even worry about it. I’m going to make the team. I just hope I win a medal.”

New Zealand fans can see Kurt Angle take on Bobby Roode for the TNA World Championship at Bound For Glory via TNAondemand on Monday, October 17, at 1pm. Simply go to tnaondemand.com and click on “Launch TNAondemand Player.” Then click the Bound For Glory logo or via “Live PPV.” 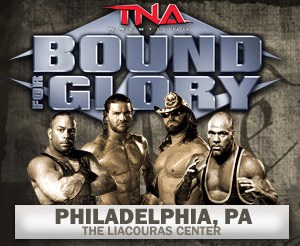