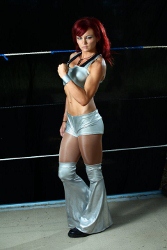 One match will be of trans-Tasman importance though, as Nurse Payne takes on Miss Sara Jay – representing Australia’s Gold Coast.

Sara has not always lived in Australia. In fact, she was born in New Zealand.

With that in mind, NZPWI spoke to Sara to discover a bit about her background and what it would mean to return to New Zealand, her home country, for her first match at KPW Grudge Night.

Sara was born in New Zealand’s “beautiful Tauranga” and grew up in Waipukurau, about 50 kilometres southwest of Hastings.

A wrestling fan for as long as she can remember, Sara grew up watching the likes of Jake “The Snake” Roberts and The Undertaker, she says.

Sara and her family relocated to the Gold Coast while she was still young after her grandfather – who was living there – was diagnosed with cancer. It wasn’t long before she discovered there was a pro wrestling training school nearby.

“I started harassing my parents when I was 14 to learn to wrestle, and I started wrestling training when I was 15,” she says.

Sara trained under Peter Ball at WCWA/MIW – now Impact Pro Wrestling Australia – before making her debut and taking on some of Australia’s finest.

Despite many matches in her career, Sara says those against Australian wrestler Harley Wonderland have been her favourite. 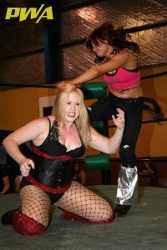 “We always have strong, solid and exciting matches against each other,” she says.

After taking on the Australian scene, a combination of passion, dedication, hard work, sacrifice and determination saw Sara head abroad to the United States and Puerto Rico in late 2009, where her whirlwind style took the competition by storm.

“I’m very quick on feet – speedy, agile – and I can surprise my opponent with some pretty brutal chops,” she says.

Miss Sara Jay became WWC Women’s Champion in her debut match with the promotion, defeating then-champ Killer Kat. Sara is the only woman to win the title on her debut, she says.

She continued her tour around North America, locking up with men and women alike in the United States as she flew the flag for Australasia.

Sara also came face-to-face with some of the industry’s biggest names in the US, rubbing elbows with “Mouth of the South” Jimmy Hart, Paul Bearer and “Hacksaw” Jim Duggan.

While returning to North America is a possibility, she says, right now Sara Jay is focussed on coming home to New Zealand to make an impact at KPW Grudge Night.

“I am so excited to be wrestling in my home country. I’ve always wanted to wrestle back ‘home’, and I can finally achieve that dream! I can’t wait for this match!”