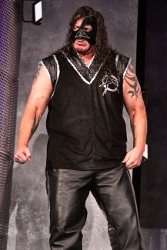 “The Monster” Abyss is a true TNA veteran, one of the most imposing members of the TNA roster for close to 10 years.

In his time with TNA, Abyss has done it all. He’s a former holder of the NWA and TNA World Heavyweight Championships, the NWA Tag Team, TNA Television and even X-Division Championships.

Outside of the ring, the character of Abyss has evolved each year he’s been with TNA. In 2012, The Monster looks to break out of his shell even more and stand on his own after spending most of his career associated with a myriad of characters from Reverend James Mitchell, to Stevie Richards, to Sting, to Hulk Hogan.

Expanding on the evolution of his character, Abyss is quick to point out that it might be time to stand on his own for once.

“I think I need to be the wrestler who thinks for himself.”

Abyss spent much of 2011 letting others do his thinking for him, with Hulk Hogan’s super-group, Immortal, calling the shots for him and much of the TNA roster.

Although Abyss has now distanced himself from the group, he concedes that being a part of Immortal may have helped him to develop his character further.

One of the staples of Abyss’ character is hardcore wrestling. Abyss is particularly known for his exploits in TNA’s famed Monster’s Ball match – his favourite gimmick match to participate in. But with more of a focus on the risk of concussions and the dangers of pro wrestling now than there was when Abyss started his career, is hardcore still a viable style? 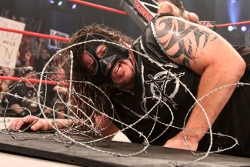 “It’s an issue that’s at the forefront right now,” says Abyss. “That issue wasn’t an issue five years ago when I did Monster’s Ball with Sabu, or Rhino, or Raven. Those issues weren’t at the forefront, so you didn’t worry as much from a perception standpoint — where people are almost insulted by a chair shot to the head now when they see it.

“On the other hand, when you do a Monster’s Ball, you’re either in or you’re out. In a Monster’s Ball, you have to be all in. As far as the safety issue, there’s no doubt about it. It influences the way you put things together. You have to be smart and do creative, impactful things and avoid those risks. You can definitely do that. It has changed the way hardcore wrestling has evolved. It has changed the way the hardcore wrestlers put matches together because of that issue.”

While considerations have to be made to keep safe during hardcore matches, accidents can – and do – happen in the ring. It was during a regular Impact Wrestling match in April of last year that a well-placed kick from Rob Van Dam knocked out four of Abyss’ teeth.

“I think that in a weird way, only in wrestling could that be an upgrade, to get your teeth knocked out,” he jokes. “I think it does add a bit to the look. I was proud of that moment. It was an unfortunate thing that happened – it was an accident, obviously, but getting them knocked out … I guess it adds to the look in a weird way.” 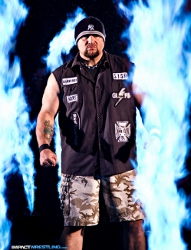 From one ECW alumni to another, Abyss steps in the ring with Bully Ray – formerly known as Bubba Ray Dudley – at TNA Genesis today for his first Monster’s Ball match in over a year. While Abyss is adamant their match will turn into a war, he has nothing but good things to say about his opponent.

“Bully Ray, his whole attitude and his work ethic, it’s unmatched. He’s got a great mind for wrestling and he is a very, very tough guy. Going back to ECW, he’s always had a reputation as being a tough guy. And not to butter him up too much but for the most-part it’s all legit.

“Bully Ray is what he says he is and he really has broken out in 2011. A guy that was traditionally a tag team wrestler with Devon for years and years – 20-something world titles together – to be in the ring with him, it’s going to be a war. I’m very much looking forward to it. I think it’s a match that fans all over the world would want to see.”

And Abyss knows a thing or two about fans all over the world. In December, Abyss was part of a crew of TNA wrestlers that travelled to India to take part in Ring Ka King, TNA’s new project designed exclusively for the Indian market.

“I was privileged to be part of the beginning of it,” says Abyss. “We were there from December 16-23. We basically did three months’ worth of television in four days. The atmosphere was incredible. That’s the one word I can put on it. It was absolutely incredible. TNA is really on to something big there.

“The shows were just – there was 3,000 people every day, and they were the most in to it fans. Without insulting anyone, they were non-smart – I’m sure that makes sense to you – they believed in everything that we were doing. The atmosphere was incredible … The set looks just fantastic. I really think TNA is on to something really big over there. It’s going to be huge, I really believe that. With the population over there, with the support of Edemol [TNA’s partner in India] and how the whole thing has been laid out by Jeff Jarrett, I just think it’s going to be a big success all the way around for everybody.”

It wasn’t just an on-camera role for Abyss either. The Monster got to draw on his marketing background to help with producing Ring Ka King – something he would like to be able to fall back on when his in-ring career starts to wind down.

“I’ve always said, and I’ve said this since the day I got into the business, that someday when it’s over, I would like to be behind the scenes and continue on my career behind the scenes, whether it’s agenting, producing, writing and so forth,” Abyss says.

“I had the opportunity and the privilege on this Ring Ka King tour of India to really further that. Not only with wrestling, but as an agent on some things, producing some things. It was a great learning experience for me all the way around. In my mind, when I’m done wresting at five, six, seven years, whatever it is, I’m done, I would definitely like to continue on in that capacity.” 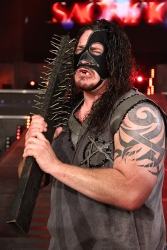 When asked which of the Ring Ka King talent not on the TNA roster he’d like to work with, Abyss seems spoilt for choice.

“All of them,” he answers. “It was a privilege to work with Chavo Guerrero over in India, and others – Chris Masters, Harry Smith and probably a few others that just don’t come to mind right now … I haven’t had the opportunity because they haven’t been with TNA, so it was a great experience and I truly enjoyed working with all of them. Chavo Guerrero is very smart and I love listening to him just put stuff together. Just the overall vibe and overall chemistry that I had with all of them was really incredible.”

Of those names already a part of the TNA roster, Abyss is quick to express an interest in locking up with Jeff Hardy once more.

“I would love to do me and Jeff Hardy again. I thought we had some fantastic matches when he was with us back in 2005 and I’d like to rekindle that a little bit.”

Abyss isn’t concerned by Hardy’s troubled past either, and welcomes the Charismatic Enigma back to the TNA roster.

“I think that Jeff Hardy getting a second chance with TNA and the wrestling business is a great thing,” says Abyss. “People make mistakes – and Jeff made a big mistake, but I truly feel in my heart, after being around him the last few months that he’s been back, that he is a different person and he has changed a lot of the ways that he does things.

“I feel that in life, not just in wrestling, people deserve a second chance as long as they work hard for that second chance. And I think he’s done that. I’m very proud of Jeff. I’ve known him since 2005, since he started for TNA, and I very much appreciate everything he’s done for the wrestling business. He has overcome a lot of hurdles, so as far as him getting a title shot Sunday I think I’m not the only one in the world rooting for him. I think there’re a lot of people rooting for him, and I think he can be one of the great comeback stories of the wrestling business.” 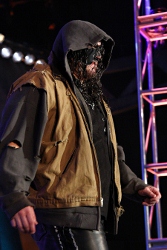 Hardy headlines a stacked Genesis card today in a TNA World Heavyweight Championship match against reigning champ Bobby Roode. For New Zealand fans who may not have seen the TNA product before, Abyss promises Genesis will deliver something for everyone.

“What [New Zealanders] can expect is a little bit of everything,” Abyss tells NZPWI. “This card … the whole line-up is just going to be pretty incredible.

“I mean, the world title match between Bobby Roode and Jeff Hardy; that alone is worth buying the pay-per-view for in itself. And then you throw on top of that “Cowboy” James Storm against Kurt Angle – what a grudge match that’s been. Kurt’s really pushed James’ buttons over the last few weeks, so that’s going to be fantastic. And then you’ve got Bully Ray and myself for the fans who’re more barbaric out there that wanna see some blood and guts. You’re definitely gonna see that in the Monster’s Ball with myself and Bully Ray.

“But top to bottom it’s a fantastic show. The Knockouts, the beautiful ladies of TNA Wrestling, and our incredible X-Division that defies gravity week-in and week-out will be on display as well. There’s something for everybody, and it’s going to be a fantastic three hours.”

And with Genesis on pay-per-view and Impact Wrestling on New Zealand television, what about the possibility of a New Zealand tour this year?

“We’re always looking to expand worldwide, and I know in 2012 that a major goal of the company is to further expand internationally. Whether or not we’ll be in New Zealand in 2012 I don’t know, but I know we’re definitely working our way out. So, stay tuned.”

Abyss takes on Bully Ray in a Monster’s Ball match at TNA Genesis. Genesis is available live on pay-per-view today, January 9, on SKY ARENA (channel 38) from 1pm, with a replay at 8.30pm