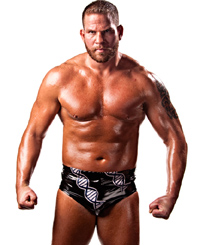 New Zealand fans may remember him from his runs with WWE, his stint on American Gladiators as the imposing Beast, or more likely as one-half of the former TNA Tag Team Champions alongside Crimson in recent weeks.

Morgan spoke to a media line-up last Thursday, ahead of a tag team championship match at Victory Road today where he and Crimson will challenge Samoa Joe and Magnus.

“We’ve been working a long time now, the four of us, especially with me and Joe,” Morgan says.

“Me and Joe were working together for a little bit for a while and we developed some really good chemistry. Threw Crimson into that mix in a three-way on one of the pay-per-views, we stepped up our getting together and putting together better matches with the three of us. Now throw Magnus in, who I have been working previously with for months in India, and I worked earlier on with when he was with the British Invasion … I knew what all four guys could do. And so does Joe. So when we pieced together these matches we tried to do the best thing we could to showcase our talents, hide our weaknesses, play to our strengths, and more importantly go out there and try and steal the show and put on the best match possible,” Morgan says of their tag team series.

“You have four guys like the four of us that don’t put ourselves first but put the match first, put the story first, that’s what you’re going to get as a conclusion or as your result, is the match we had last pay-per-view, and I’m hoping that we can go out there and do even better this next pay-per-view.”

Victory Road will be held at the Impact Zone in Orlando, Florida, TNA’s regular venue for Impact Wrestling and pay-per-view events.

While Morgan appreciates the Impact Zone fans, it’s time for TNA to take its show on the road, he says.

“Let’s be real: we gotta get out of that place. We gotta get on the road, and I think that’s where we’re headed. I know a lot of fans have been hearing that for a while but we have a lot of success when we do bring our pay-per-views on the road.”

Last year’s Bound For Glory pay-per-view was held in Philadelphia, Pennsylvania, and two episodes of Impact Wrestling were taped in front of a sold-out audience at Wembley Arena in London, England, last month.

Working in front of a crowd starved for wrestling action encourages everyone on the roster to step up their game, and gives them an opportunity to evolve, Morgan says.

“I think characters evolve in this business when they’re in front of a crowd that’s giving them that excitement back because they’re so happy to be there. When you’re wrestling in front of fans that are that happy to be there because they’re die-hard fans and they don’t get a chance to see you live very often so when they do it’s a big deal to them, that rubs off on the wrestlers.”

“Having the level of excitement that I think comes with being in front of a live crowd just enhances the entire product for people at home, watching it on TV going ‘holy crap, those fans look pretty pumped up. They must like this guy, maybe I should like this guy’. That’s how it works: monkey see, monkey do.”

Morgan had the chance to wrestle in front of a wrestling-starved crowd in India when he was the first heavyweight champion of Ring Ka King, TNA’s joint-venture with television production company Endemol .

Morgan says he had no idea what to expect from the Indian crowd, but Ring Ka King’s success has left him open to the idea of trying to break into new markets, such as Australia or New Zealand.

“I think Ring Ka King’s been a great blueprint – pardon the pun – for that success, so why not try another market? There’s got to be some places out there that are just dying to have a wrestling show of their own – ‘cause that’s what this is with Ring Ka King,” Morgan says.

“These Hindi fans out there, they have something that they feel is their own, and they’re energetic about something – they come out by the droves. I’m talking shake-your-taxi-cab-when-you-leave-the-show. They stop your car and they start shaking it. They treat you like you’re a Beatle over there, no exaggeration.”

As if just being a wrestler wasn’t enough, at 7’0” and 318lbs, Morgan attracts more than his fair share of attention when he travels overseas – that’s if he can even fit on the plane.

“Sometimes we have to get on these planes that are very small because it’s a quick flight, versus getting on a bigger plane, and I’ve got to literally turn my body sideways and duck – I mean really crouch, damn-near crawl, to get down the aisle to get to my seat … I look like if I were to even exhale, let alone stand up to my full size, the freaking plane would explode. So you have that, a little bit of comedy in that … the process of me getting on some of these [aeroplanes] are hilarious.”

Once he touches down, Morgan’s hassles are far from over, especially outside of the United States.

“You should see me in Japan,” he says. 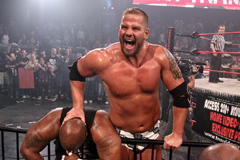 “These people would just come from all walks of life with their cameras taking pictures, videotaping. I’m just sitting there in McDonald’s with my buddy Mark Jindrak – I remember we were eating Big Macs or something like that – but these people are sitting there videotaping us and I’m going ‘What the hell are they videotaping us for?’ and our translator starts going ‘Dude, look at you, how many people like you do you think walk through these streets of Roppongi [a suburb of Tokyo], c’mon!’”

Morgan says the attention “comes with the territory”, and had similarly crazy experiences while he was in India.

“I’ve still got the scar on my forearm from giving one of these fans a high-five leaving the arena and this friggin’ kid scratched my forearm so hard – obviously he drew blood. It’s still not fully healed, like, I have this huge scar on my forearm just from this fanatical fan because, again, they’ve never seen guys my size.”

Morgan’s size has also earned him attention in the United States, where he was cast as Beast on American Gladiators in 2008.

“Rumour had it that Hulk [Hogan] was trying to get a bigger gladiator, like a wrestler, but somebody in the form of this Beast character,” Morgan told NZPWI. “Long story short, my agent wanted me to at least audition for it. At the time I think I’d shaved my head almost, I think I’d cut my beard completely off, and didn’t look very beast-like, if you will.

“I remember auditioning for them in California, in Los Angeles, and I had to go through like four or five different auditions. Eventually they told me to start growing my hair out, start growing my body hair out, things like that, so right then and there I started getting – obviously – the feeling that I got this role.”

Morgan, who played college basketball and was also involved in street fighting for money, says taking the role on American Gladiators was a “no brainer”, allowing him to prove his athleticism in a legitimate field.

Morgan also believes there is a place for legitimate sport in pro wrestling, advocating cross-promotion between wrestling and mixed martial arts.

“Contrary to what a lot of people say in our business, my opinion is that there are fans that watch both. I firmly believe that,” Morgan says. “As far as cross-promoting goes, I think it’s a smart idea. I can’t tell you how many UFC, Bellator fighters that I’ve been in contact with that love what we do, that watch it consistently.

“When I shot American Gladiators, [MMA fighter] Josh Barnett was there backstage and he was going bananas because he loves pro wrestling and had a hundred questions about it.

“Lots of other guys – when I was in Japan with a group called HUSTLE, I met Rampage Jackson at the dojo that we shared with PRIDE at the time, and same thing, he straight-up told me he uses Junkyard Dog’s character because he loved him as a kid.

Just like Jackson, Morgan also grew up watching the wrestling stars of their 80s. None could top the larger-than-life presence of Hulk Hogan, he says.

“I assure you there wasn’t a bigger Hulkamaniac in this business more than Matt Morgan as a kid”.

Despite now being a wrestler himself, Morgan remains a huge fan.

“I wouldn’t be doing this – there’s no way that I would be staying away from my wife for four days a week if this wasn’t something that I had crazy fandom over, which is what I do.”

The inner fan will come out after his tag team title match on Monday, when Morgan gets to sit back and watch Austin Aries defend the X-Division Championship against Zema Ion.

“I like Austin Aries a lot, I like what he does. I like that he goes out there and he performs his job. He actually goes out there as a villain and, god forbid, actually goes out there and makes those fans boo him. I’ve got respect for a guy who does that. And no matter how many times fans might cheer for him, might be impressed with his moves and things that he can do, at the end of the day the guy still goes out there and he makes sure he performs his job – no matter who he’s wrestling against will wind up getting cheered as a result, and that’s a heel’s job at the end of the day. I respect Austin just from that standpoint alone, but his in-ring ability is ridiculous. I like his story-telling; I like everything about him, his promos and very much-so looking forward to his match on the pay-per-view.”

Outside of the ring, Morgan suffers from ADHD and was kicked out of four schools before he was a third grader.

Morgan now acts as a spokesman for CHADD, Children and Adults with Attention Deficit Hyperactivity Disorder.

Morgan says his ADHD makes it difficult to concentrate on things he doesn’t have an interest in for long periods, but has luckily never had that issue with wrestling.

“If you’re in the middle of a match, you can’t sit there and just start daydreaming and wonder: ‘Hey, what’s that guy out there eating popcorn in the third row? I wonder if it’s good…’ BOOM! You get your face taken off by Samoa Joe in the middle of the ring. You can’t do that, obviously, if you enjoy your life,” he laughs.

Matt Morgan and Crimson challenge Samoa Joe and Magnus for the TNA Tag Team Championships at Victory Road. Victory Road is available on pay-per-view today, March 19, on SKY ARENA (channel 38) from 1pm, with a replay at 8.30pm.