SCW Brawl in the Hall tomorrow 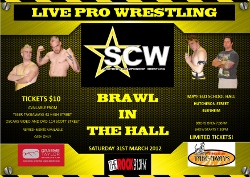 “Lethal” Lazza Stevens defends the SCW Championship this Saturday, March 31, at SCW Brawl in the Hall.

Stevens, who won the title late last year, specifically requested Reece Breeg be his opponent for his first title defense.

With SCW management granting his request, will “Lethal” Lazza Stevens be at an advantage taking on a hand-picked challenger tomorrow night?

Or can Reece Breeg, a mainstay on the SCW roster, upset Stevens and make his title reign a short one by claiming the SCW Championship?

Brawl in the Hall will also see “The Adrenaline Rush” Taylor Adams return home to Blenheim, alongside NZWPW’s He Toa Cup Champion, Ben Mana, who Adams will wrestle.

Both Adams and Mana have momentum on their side following wins at Bringing Down the House earlier this month.

Adams defeated Johnny Idol to earn him and Mikey Rave an NZWPW Tag Team Championship match, while Mana retained the He Toa Cup against Axl.

Only one man can leave Marlborough with a win under his belt though.

Will it be the ever-popular Ben Mana who picks up one more win on his road to an NZWPW Championship match at Power Play, or will Taylor Adams make his homecoming one to remember with a huge win in front of his friends and family?

SCWE Brawl in the Hall takes place this Saturday, March 31, at the Mayfield School Hall on Hutcheson Street, Blenheim. Click here for a map. Doors open at 7pm with the first match scheduled to start at 7.30pm. Tickets are available on the door at a rate of $10. The card, subject to change, is listed below.