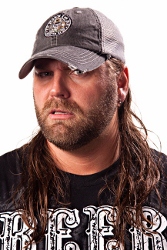 It will be a “dream come true” for James Storm to be able to wrestle in the main event of Lockdown, 10 years after making his TNA debut.

“For me, it is really a dream come true, because you don’t hear of too many guys staying with one company for 10 years,” Storm said, speaking to a media line-up on Thursday.

“I have been here since day one. I’ve seen the company’s ups and downs. I’ve seen people come in and leave. When I had the opportunity to go different places I chose to stay here because I believe in the company. I’ve seen people get pushed ahead of me who I didn’t think deserved it, but I went with it. I put my time in here with guys like me, [Bobby] Roode, AJ Styles and Frankie Kazarian to try to show the world what we have.”

Lockdown is Storm’s favourite of what he considers to be TNA’s major pay-per-view events (Lockdown, Slammiversary and Bound For Glory) as he has always been a fan of steel cage matches.

Storm knows the cage better than most. While his match with Bobby Roode will be his first one-on-one main event inside a cage, Storm helped to put TNA on the map with his tag team encounter as part of America’s Most Wanted against Triple X in TNA’s first steel cage match in 2003.

Storm has also been involved in the Lethal Lockdown match, a staple of Lockdown pay-per-view events for almost seven years. 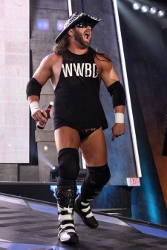 “I think it was the first one [Lethal Lockdown] in the Impact Zone and AJ climbed to the top of the building and was hanging from one of the rafters and I was lying on a table. When he came off with a splash we both thought we were going to go through the top of the roof.”

Storm knows the risks are high at Lockdown – “there ought to be blood involved, being in a cage match” – especially with TNA’s unique steel cage.

“It’s one of those [matches] where you go in and you know you’re going to get beat up,” Storm said. “Plus, the TNA cage, I think it’s built inside-out. The rivets were welded on the inside instead of the outside, so when you hit it – you hit one of those rivets – it’ll bust you up pretty good. That’s one of the things you have to avoid. You go in and you hope you don’t get hurt too bad, but you’re going to get hurt one way or another.”

Getting hurt didn’t used to bother Storm, but as a father of two he has had to strike a balance between giving the fans what they want and making sure he’s healthy enough to play with his children when he gets home from work.

“I have a six-year-old daughter, and back before her it didn’t bother me to get hurt at all,” Storm said, “but now I want to be able to come home and teach her how to ride her bike, or to play with my new-born son. So when I’m in the ring, if I’m going over stuff, I definitely want to… not play it safe – because I want to give the fans what they pay for – but I kind of have that obligation at home that I want to take care of as well.”

Being in the ring takes its toll regardless though. Storm had surgery to remove bone spurs from his ankle in March, and has also undergone surgery on his liver and kidneys. 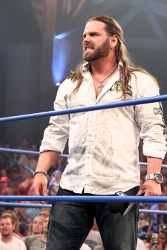 “The last couple of TV tapings, I had to wrestle wearing my shirt, and it’s because I actually had liver and kidney surgery,” he said. “I had a bruise on the outside of my liver – not from drinking. That’s the first thing I asked. I asked him [the doctor] if it was from drinking, and he said, ‘No, drinking would be from the inside’. The bruise was on the outside and blood was leaking in … so I basically had wires sticking out of me and I had to keep going. Now everything is fine and dandy.”

Monday’s Lockdown will be held at the Nashville Municipal Auditorium, a welcome change from the Impact Zone, Storm said.

“I’ve said it – I think TNA does need to get out of the Impact Zone. It’ll help the product grow even more because you get in front of a fresh audience, an audience that pay to be there. People that pay money, they’re going to have fun because they’re paying their hard-earned money to be at the shows. Also it helps the show out because the crowd is loud like that, so there’s more energy for the wrestlers – we just kinda pick it up a notch.”

One of the most exciting aspects of holding Lockdown in Nashville for Storm will be having his mother in attendance.

“Win or lose, she is going to be happy either way to just see her son in a huge pay-per-view like that in front of all those people,” Storm said. “She was pretty much the only person to believe in me when I said that I wanted to be a professional wrestler.” 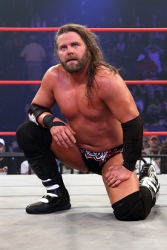 Storm knew he wanted to wrestle from an early age, and grew up watching the sport with his father and step-brothers.

“I used to go to Jerry Jarrett’s wrestling show, the USWA, in Nashville and I used to see guys like Jerry Lawler, Bill Dundee, guys like that. These guys were just larger than life when I was small and just made you want to be a professional wrestler. As far as growing up, guys that I enjoyed watching were Bret Hart and Shawn Michaels. Those were the two guys I was drawn to.”

Storm signed a WCW developmental deal not long after breaking into the business. After a brief period back on the independent circuit when WCW went out of business, Storm was signed by TNA in 2002, making him one of three men – along with AJ Styles and Jeff Jarrett – to have been with TNA since the company’s first show.

In his 10 years with TNA, Storm’s character has evolved to the point where Storm says there is no longer any difference between what you see on and off-screen.

“This is really who I’ve been my whole life,” Storm said. “I’m portraying myself on TV. I’m just an old country boy who likes to have fun and drink beer. It doesn’t matter who I’m with or where I’m at.”

If Storm is successful at Lockdown, he would like to make his first title defence against AJ Styles at Slammiversary, marking TNA’s 10th anniversary by taking on one of the company’s locker-room leaders.

“Me and AJ [Styles] and Bobby [Roode] – we’re kind of like the locker-room leaders, so we try to keep everything under control,” he said. “The young guys who come in – the new guys – are very respectful. They even come up and ask us if we can watch their match … it’s a very respectful locker-room … we all want the best show possible.”

James Storm challenges Bobby Roode in a Steel Cage match for the TNA World Heavyweight Championship at TNA Lockdown. Lockdown is available live on pay-per-view tomorrow, April 16, on SKY ARENA (channel 38) from 12pm, with a replay at 8.30pm.