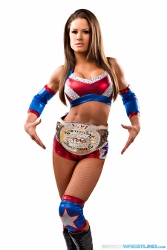 I find it slightly odd to be talking to Brooke Tessmacher and Robbie E at the same time. Brooke shares my opinion.

The two aren’t together Thursday night though. Robbie E is calling from his home on the Jersey Shore, with Bigger Rob by his side, no doubt. Brooke, meanwhile, has just finished taping Impact Wrestling in Orlando, Florida.

Although she doesn’t want to give too much away and spoil tonight’s episode for New Zealand fans, Brooke reveals she took part in a segment with Knockouts Executive Brooke Hogan and Direct Auto Insurance, TNA’s primary sponsor.

It’s not unusual for Brooke Tessmacher to be rubbing shoulders with TNA’s elite. Brooke is the face of the Knockouts division after dethroning Gail Kim to become champion at TNA’s last pay-per-view event, Slammiversary.

“[Being champion is] very difficult,” she says. “There’s a lot more stress that comes with it. You’re required to do a lot more and there’s a lot of pressure. Whereas when you’re fighting for it, obviously that’s difficult too, but just to hold it and retain it, that’s on a whole other level.”

Robbie E cuts in now, annoyed with the amount of attention Brooke has been getting.

“For the last five minutes you’ve been talking to her, I mean, do you wanna have a one-on-one interview with her, bro? I could be at the club right now.” 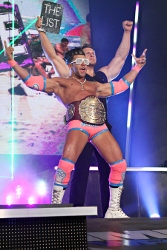 Big Rob plays hard, but he works hard too. Robbie E has held both the Television and X-Division championships since he became part of the TNA roster in 2010, winning the X-Division Championship in just his second match with the company.

“I’ll knock him around,” Brooke responds. “He underestimates me, that’s fine. Asstastic and Tess Shockers all day, let’s do it. Tell me when you’re ready.”

“Yeah, you’d love to knock me around, but in the bedroom,” Robbie fires back.

With an impressive four TNA championships held between them (Brooke is a former Knockouts Tag Team Champion with partner Tara) I pose the question of Austin Aries, TNA’s current X-Division Champion who will vacate the title at Destination X for a World Heavyweight Championship match.

Would former X-Division Champion Robbie E do the same? Of course. Everyone wants to be world champion.

“Do you know how many chicks I could get with that thing, bro?”

I can only imagine.

It’s slightly different for Brooke though. As the Knockouts Champion, she is already at the top of her division. It’s hard to imagine a scenario where she would willingly give up the title she fought so hard to capture.

Neither Brooke nor Robbie E have matches scheduled for Destination X. Given the choice, though, Brooke would defend her title against Mickie James in a heartbeat.

“I’ve already taken down Gail at Slammiversary. That was a great accomplishment. I would love to get in there with Mickie. She’s one of the best. I think that would be an awesome match.”

Robbie E also has his eye on one of the best. 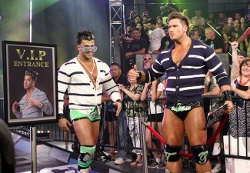 “It’s Destination X, but if I have the microphone I guess I could call out anyone in the locker-room, really,” he says. “It doesn’t have to be an X-Division wrestler. If I ever get that chance, bro, I’m calling out Hulk Hogan. Just the rules he’s been making, they don’t agree with me, and just, me and him, it’s been boiling. We gotta come face to face, the match has to happen. People want it, bro … the two biggest stars in professional wrestling history need to collide.”

Big Rob isn’t really concerned about Destination X, though. The only thing of interest to him at the moment is a main event spot at Bound For Glory.

“To be honest with you – clearly if I wanted to be on the pay-per-view I could have been showcased in the X-Division, y’know, being a former champion – but I’m so focussed on the BFG, the Bound For Glory series right now, that I just can’t concentrate on the X title stuff. I’m concentrating on the world title.”

Brooke questions Robbie: “Aren’t you in, like, second-to-last place right now? So you really do want to concentrate…”

The number of points Big Rob has at the moment is a little bit of a sore spot.

Both Brooke and Robbie E find time in their busy schedules to stay up to date with TNA programming, watching the likes of Spin Cycle and Xplosion, as well as Impact Wrestling.

“I wanna study my competition and check out the Knockouts, you know the deal bro,” Robbie E says.

When it comes to picking a favourite wrestler to watch, it’s an easy decision – especially for Robbie E.

“I love watching…” Brooke begins, before Big Rob cuts her off mid-sentence.

“Lately I would say,” he starts, “I think he’s been on a roll; he’s really been entertaining; his hair’s looking good and everything; I’ve really been focussed on Robbie E lately. His matches have been the best on the show, he’s really at another level than everyone else. So that’s the guy I got my eye on.”

“Yeah, for sure, I agree,” Brooke sarcastically responds.

Someone Brooke genuinely has her eye on is Gut Check contestant Taeler Hendrix. After a try-out match against Tara on last week’s Open Fight Night, Hendrix will find out whether she has made it to the TNA roster on tonight’s episode of Impact Wrestling. 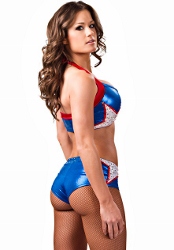 Robbie E is not a fan though.

“She is nowhere near hot enough to be a TNA Knockout,” he expertly chimes in.

It would take a total makeover for Taeler to get on The List. Hair, clothes, shoes, the works.

Neither Brooke nor Robbie reside in Orlando, and both like the idea of taking TNA on the road.

“Every time we go to a different location it’s cool because it’s exciting for the fans in that location,” Robbie says. “Yeah bro, the more travel the better.”

And what about the possibility of an Impact Wrestling tour to New Zealand in the future?

“How awesome would that be?” Brooke says. “I’ve never been anywhere close.”

Robbie E has: “I actually have been to New Zealand – Australia for wrestling before, and man it’s cool. It’s a party every time I’m over there and I would definitely love to go back.”