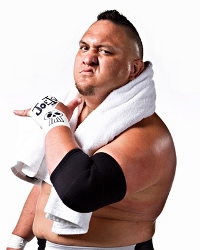 Since its introduction last year, the Bound For Glory Series has quickly become one of the most exciting parts of the TNA calendar year.

This year’s series has been of no more importance than to Samoa Joe, who has chalked up 68 points – second only to James Storm – in comparison to his zero points in the 2011 Series.

“I think that the biggest difference in the tournament this year from last year is that it actually makes sense this year,” he said. “I have to hand it to the tournament organisers, I think they put together a hell of a tournament.”

The 2012 Bound For Glory Series has been much easier for fans to follow, Joe said, and provided some nice caveats – such as more points for a submission victory – which allowed him to accumulate his 68 points.

Frustrated with losing over and over in 2011, Joe ended up attacking several of his fellow Bound For Glory Series competitors in an effort to remove them from the tournament due to injury.

“We had some ridiculous scenarios put together [last year] and kind of pushed on the guys in the tournament and it led to me maybe not appreciating how things were being run and kind of over-reacting a bit,” he said.

Joe suffered a rare loss in this year’s tournament against Jeff Hardy on Saturday’s Impact Wrestling. He will wrestle Hardy in a rematch, and Bound For Glory Series semi-final, on pay-per-view at No Surrender this Monday. 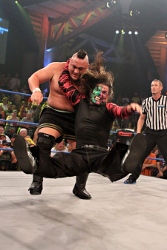 While Jeff Hardy found his way to TNA after a successful WWE career, Samoa Joe cut his teeth on the independent wrestling scene alongside TNA World Heavyweight Champion Austin Aries and WWE Champion CM Punk, among others.

“I think the biggest thing is that when all of us came up we were focussed on a style of pro wrestling that was our own, that was a mixture of the things that we enjoyed, that took the best of several varied styles of professional wrestling from around the world that we studied,” Joe said of what made he and his peers stand out.

“There were a bunch of guys, when I was coming up, trying to be the guy at the end of the night. They didn’t want to be opening up or being midway through the card or in a multi-man match, they wanted to be one-on-one and they wanted to go out there and put on a show.”

“I think that there’s always been an enormous amount of talent in the independent ranks, it’s just a matter of them hitting creatively at the right time with when the companies are looking, and a lot of guys don’t.”

It was no accident that Samoa Joe joined the TNA roster in 2005 though. The major companies always have feelers in the independent scene, and talented wrestlers will ultimately succeed if they stick with it, he said.

In transitioning from the independent scene to TNA Impact Wrestling, Joe was forced to alter his moveset in order to remain competitive with a much more diverse roster. 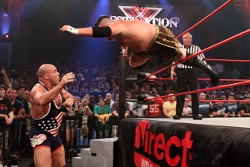 “Stylistically, I think I just changed a lot of what I do,” he said. “Not all techniques can be applied to all wrestlers at all times. I think this happens to a lot of guys any time you make the transition to television. All of a sudden you’re going to have to rework your offense because not everyone can be easily suplexed.

“There are some huge dudes when it comes to wrestling in one of the bigger companies. I think a lot of my offense was retooled in the fact that it’s got to be technique and stuff that I can hit on anybody no matter what or who it is.”

It is modifications like these that have allowed Samoa Joe to operate at such a high level for such a long time. After spending seven years with TNA and winning the TNA World Heavyweight Championship in 2008, is there anything else left to accomplish?

“I hate to sound like the proverbial pro-wrestling cliché but as far as my career will go, ‘til the wheels fall off or I’m heavily advised against continuing,” he said.

“As long as I can do it and do it effectively and still be a top competitor in the game then I’ll be more than happy to continue wresting. As for my future plans, it’s always about the World Heavyweight Championship. I think it’s a little overdue. I should have multiple by now, so that’s what I’m working on.”

Joe feuded with Kurt Angle over the TNA World Heavyweight Championship in 2008 before ultimately losing the title to Sting.

His feud with Kurt Angle ranks right up there with his series of matches against CM Punk in Ring of Honor (ROH) when it comes to his all-time favourites. 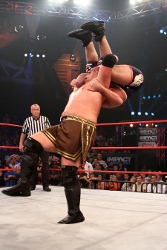 “Anything me and Kurt have been involved with it kind of just worked,” Joe said. “Kurt’s a very kind of alpha personality and he can’t stand for any other top dogs to be around so it works out very well.

“Of course I miss wrestling Punk. I think he’s a hell of an athlete and we managed to bring out the best in each other.

“Those are the two. To nail [a favourite opponent] down to one is ridiculous because I’ve had the opportunity to have so many great battles with so many guys. AJ is another one I’d put right up there. Any time me and AJ get in the ring across from one another good stuff happens.”

Joe and Styles were famously – along with Christopher Daniels – involved in a triple threat contest for the X-Division Championship in the main event of Unbreakable 2005.

“I think if anything was close to a perfect TNA moment it would be that match,” Joe said. “Have I had mine yet? No, but I don’t think I’ll ever have mine, at least not by my standards.

“I think when you look back to that match it’s a calling card. It kind of outlines the new generation of wrestling and encapsulates so much from so many styles around the world. It really was the X-Division at the time.”

It’s honesty like that which has allowed Samoa Joe to develop such a close relationship with the fans of Impact Wrestling.

“My relationship with the fans is a real honest one,” he said. “There’s no real pretense about me and about what I like to do in the ring, and I think that’s its main selling point, I guess, if you can quantify it that way. In that aspect I think that’s what people relate to.

“I kind of go out there and I handle situations real simply, and that’s with my fists and knees and elbows and whatever else I can put on you, and I think that’s refreshing to some people – at least some people want to do that more in their real lives. I don’t know, I don’t condone it of course but you can’t help that people sometimes feel that way.”

His use of hard-hitting strikes makes Samoa Joe a great fit with the strong-style of Japanese puroreso. 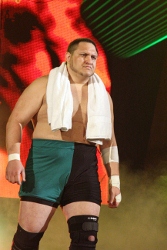 Joe wrestled a dream-match against Japanese legend Kenta Kobashi in 2005, but would like the chance to lock-up with Jun Akiyama before the end of his career.

“I’d like Jun Akiyama one-on-one,” he said. “When you talk about the major heads of talent in All Japan during its heyday you talk about Kobashi, you talk about Misawa – which I’ve had the pleasure of wrestling – Kawada, and Akiyama.

“Those guys were the premier heavy hitters I remember when I first started to watch Japanese wrestling on TV. So I’d like to wrestle Akiyama in the ring, singles, one-on-one. Kawada, of course, and if he’s up for it, I’d always like to scrap with Tenryu.”

It’s not just Japanese legends Joe is interested in wrestling though. WWE Champion CM Punk recently expressed an interest in working with Joe once again, and the feeling is mutual.

“I’m proud of him,” Joe said of CM Punk. “But I’m not surprised [he became WWE Champion], that’s the funny part. I knew what he was capable of then and he’s doing well now.

“I appreciate him wanting to wrestle me and wanting to get back in the ring. It’s always appreciated to be thought of, and any time he wants to come down to Orlando and scrap it’s not a problem … I’ll do a million [minutes] with him if I ever get the chance. It shouldn’t take that long though.”

Samoa Joe wrestles Jeff Hardy in a Bound For Glory Series semi-final at No Surrender tomorrow, September 10, from 12pm on SKY ARENA.

WWE NXT is coming to New Zealand for the first time ever this December as part of the brand's biggest...

WWE Payback began a busy week for wrestling fans last Monday. How did it stack up compared to the other...