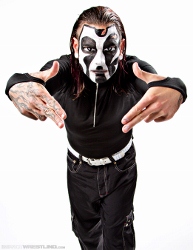 This time last year Jeff Hardy was nearing the end of a 10 day jail sentence for trafficking in controlled prescription pills and possession of anabolic steroids. There was nothing else to do while incarcerated, so Hardy sat, and he thought.

“I was sitting in the slammer wondering what my future held,” he says. “Basically I set a goal for myself to have a great 2012 and do extremely well. Whether I became champion or not wasn’t important at the time, I just wanted to come back and have the best matches I possibly could. I think I’ve held up to that. I’m extremely proud of myself, and I hope all my creatures are as well.”

They are. Hardy’s fans, known as the creatures of the night, embrace the Charismatic Enigma, flaws and all. They’re probably drawn to the honesty and candidness he displays during Wednesday’s conference call.

Meeting the man outside of the ring can be as influential as watching him fly from pillar to post inside of it. Despite all of Hardy’s success, transforming from a self-taught enhancement talent to a multi-time world champion, fans will discover he has not changed or let anything go to his head, he says.

Hardy attempted to play the role of a heel in 2010 but was doomed to fail from day one thanks to the bond he has created with his fans. “It was a cool experiment but it was almost impossible to pull off because overall the fans like me either way,” he says.

‘Be yourself’ is Hardy’s motto – one which has seen him wrestle in Japan with second-degree burns after a self-inflicted accident at his brother Matt’s annual Christmas party. (“We had done this segment on The Hardy Show called ‘fire bumps’. We burned the Christmas tree and my buddy was like ‘Oh, let’s do a fire bump’. I tried to do the simplest little back bump into the tree that was burning parallel on the ground and I burned my butt so bad it was horrible”).

Years of high-risk antics in front of millions around the world have made Hardy a household name in the professional wrestling scene. But there are more facets to the Charismatic Enigma. Underneath the intricate face paint lies Jeff Hardy the husband, Jeff Hardy the father, Jeff Hardy the artist, and Jeff Hardy the musician.

Inspired by the Stone Temple Pilots and Pearl Jam, Hardy formed Peroxwhy?gen in 2003. The band has four singles due to be released in 2013. Hardy and TNA composer Dale Oliver have collaborated on ‘The Enigma Project,’ due out before Christmas. And perhaps most importantly, Hardy has a new theme song on the way potentially as early as Bound For Glory. He originally intended the track for Matt when his brother was part of the TNA roster but can see a strong relationship between it and his current direction.

“It turned into a song called ‘Reptilian’ that went with the whole cold-blooded vibe, but just a really cool song,” he says. “For what I’m doing now with my face, and my entrance is a little more slow and a little more methodical at first, it’s perfect. I’m so looking forward to the first time that’s played because it was ‘Another Me’ and then ‘Resurrected’ and this’ll be the third year in a row that I debut a new entrance theme. I think it’ll be great to keep that going for the next three years. That’s something that no wrestler has ever done and I would like to be the first to do it.” 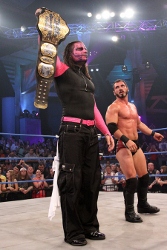 It’s clear the importance music and art play in Hardy’s life now. With lyrics offering a better way to express himself than any wrestling promo, Hardy hopes to be able to move between the music and wrestling scenes in a similar fashion to WWE Superstar and Fozzy frontman Chris Jericho.

However he applies himself creatively, all of Hardy’s projects are 100 per cent his own. “Even my paintings, you can see a piece of my work or a painting and know it’s me,” he says. “I think even if I had a mask on [in the ring], whatever my grace is, flying through the air, I bet you can always tell it’s my style and my take on things and the way I do things. It’s just the way I move, it’s always pretty obvious who it is.”

That style and grace in the ring has altered over the years as Jeff Hardy the wrestler and musician gave way to Jeff Hardy the father. Looking after a daughter has put significant pressure on Hardy to scale back on his high-risk manoeuvres. (Although he has yet to require surgery for any injuries suffered in the ring).

“I think I’m afraid now more than ever of seriously getting hurt,” Hardy says, “because it’s so cool to be a dad and so cool to be growing up and reuniting with youth through my daughter.”

Hardy will have to tweak his in-ring style at Bound For Glory. For most of his career Hardy has played the role of the underdog, the smaller man in the ring. He will enjoy a rare size advantage over TNA World Champion Austin Aries, allowing him to go back to his OMEGA days working with long-time friend Shannon Moore. Bound For Glory is as much about getting back to his roots as it is about redemption.

Hardy is more than familiar with Austin Aries. He always made a point to watch Aries’ matches on the undercard when A Double was the X Division Champion. (“He would do things that I had never even thought about”). Although he wasn’t at Destination X in person, Hardy watched the show on television and was pleased to see Aries take home the TNA World Championship.

He was flattered by Aries’ promo on a recent edition of Impact Wrestling praising Hardy as a future Hall of Famer, and backs the current champ to achieve similar levels of success.

“He does so many different things where I’m like ‘Oh my god, this guy’s crazy’ and now basically my thoughts and his thoughts are going to meet [at Bound For Glory] and there’s no telling what’s going to happen.”

It’s intimidating to step in the ring with someone the calibre of Aries and to wrestle the main event of TNA’s biggest show of the year comes with a lot of pressure, but at the end of the day the TNA World Championship is Hardy’s ultimate goal and there is only one way to achieve it.

“I’ve come so far and it’s all built up to this,” he says. “I came so close with Bobby Roode but never fulfilled my dream and then shockingly Austin Aries became world champion at Destination X. He has done so good and he is so good. So many people believe and have faith in me but it’s not going to be easy, that’s for sure. There’s a ton of pressure and I just hope I can keep up.”

With WWE Battleground just days away, which scheduled matches have piqued the interest of the NZPWI Staff? Sting is the...

TNA World Heavyweight Champion Jeff Hardy can approach the main event of this year's Lockdown pay-per-view in one of two...