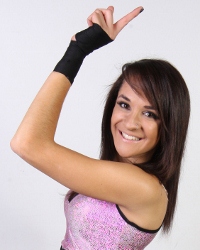 IPW Women’s Champion Evie crosses the ditch this weekend to defend her other title, the Interim PWWA Championship, against Shazza McKenzie.

Australia’s resident cheerleader will challenge Evie for the title at Bash at the Beachie this Saturday night.

“While I’ve never faced you before Shazza, I’ve seen the way you fight,” Evie blogged.

“While your skills are impressive and I know you have brawled with the best of them, I also know you fight dirty.

“But I can fight just as dirty if need be. Just know that I’m preparing for this match on January 12 with only one goal: to retain the PWWA interim title.”

The match will be Evie’s first PWWA Championship defence since wrestling “Rate Tank” Kellie Skater to a draw at a PWWA event in October.

Win, lose or draw, Evie will be in action against Shazza McKenzie again one week from Saturday when she and Jessie McKay take on McKenzie and the returning PWWA Champion, Madison Eagles.

“Madison, you have been someone I have looked up to for a while now,” Evie blogged.

“You are someone I crave to wrestle against, because I know I can learn so much from someone like you.

“While I know for a fact that being in the ring against you would teach me a lot, it would also ignite the fire to not be perceived as an underdog.

“I have fight, and when we do meet in the ring on January 19 at Casula Powerhouse, I will show you personally how much of a fighter I am.”

Tags: Bash at the BeachieEviePWAPWWA