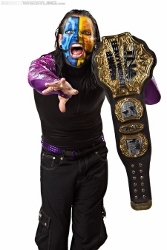 TNA World Heavyweight Champion Jeff Hardy can approach the main event of this year’s Lockdown pay-per-view in one of two ways.

On one hand, it’s familiar territory for Hardy. The champ will defend his title against Bully Ray, a man he’s seen across the ring from him for more than a decade in a multitude of high-risk matches.

“It’s really cool thinking about the TLC matches many years ago with the Dudley Boyz and the Hardy Boyz,” Hardy told a media line-up on Thursday.

“We both have reinvented ourselves over the years, and it’s just so exciting to be headlining such a huge pay-per-view, Lockdown … and still be able to do what we do. Even watching all those TLC matches and now on our solo paths and doing so well. It’s really something to be proud of, and I can’t wait to see what happens.”

On the other hand, Hardy is not the same man he was 10 years ago. The Charismatic Enigma enters TNA’s steel cage today as the World Heavyweight Champion, but also as the father of a two-year-old girl.

While he says mental preparation is much the same now as it was a decade ago, Hardy has more to think about when he steps in the ring these days, even if his wrestling style doesn’t particularly reflect it.

As well as a family to consider, Hardy has to take better care of his body the more he ages. At 35, the 19-year veteran visits a chiropractor three times per week, in addition to fitting in massages and icing down his sore spots post-match.

Despite the need for more maintenance, ageing hasn’t forced the World Heavyweight Champion to slow down just yet. Hardy is optimistic he’ll still be in the ring 10 years from today.

“It’s always going to be in my blood,” he says. “I think my body will tell me when I have to stop. Hopefully I’ll be 45 or 50 years old and still having a match every now and then.”

Possibly contributing to Hardy’s longevity in the sport has been TNA’s more relaxed schedule when compared with his time spent on the road in WWE. Being attacked by violent renegade group Aces & Eights meant Hardy missed out on Impact Wrestling’s tour of the United Kingdom earlier this year, giving him one month off television to spend with his family.

The World Heavyweight Champion – who released his debut EP, The Enigma Project, last year – has also been working on a second album with his band, Peroxwhy?gen, expected to be released in June.

There is not always this much downtime for Hardy though. Doing media in the lead-up to Lockdown eats up a lot of the Charismatic Enigma’s time in March. When it comes to TNA, the main draw-card for the promotion is being an alternative option, he says: “I just like being the alternative, I like being the other place to be or believe in.”

TNA Impact Wrestling, the promotion’s weekly television show, leaves its regular venue in Orlando, Florida this week and begins to tour the United States. Lockdown will also be held away from the Impact Zone, taking place at The Alamodome in San Antonio, Texas.

“We’ve been in Orlando for so long and we see a lot of familiar faces,” Hardy says. “It’s necessary to get out – especially as hard as all the talent works in TNA – to get out on the road and see different faces, bigger crowds, just make the whole product better.”

Both Hardy and Bully Ray will be working hard today with a worldwide pay-per-view audience watching their title clash in the main event of the evening. If you’ve seen a Jeff Hardy match before you’ll know what to expect, Hardy says, with the addition of a steel cage making this a truly unmissable main event.

“What’s going to be different, hopefully, is the unknown effect of any cage match,” Hardy says. “Lockdown last year probably had one of my favourite cage matches of all time against Kurt Angle … I’m going to do nothing differently unless I have to but I’m going to go out there and give it my all like always.”

TNA Lockdown is live on pay-per-view from 1pm today, March 11, on SKY ARENA.