Banks to train under Davey Richards 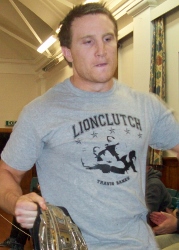 Richards, a former ROH World Champion, has wrestled for companies all over the world including DGUSA, New Japan Pro-Wrestling, Pro Wrestling NOAH, PWG and ROH. Pro Wrestling Illustrated ranked him seventh in the PWI 500 for 2012.

“I sort of mould my style similar to Davey’s,” Banks told NZPWI, “so given the chance to train with someone who has given me inspiration to do what I do is such a tremendous opportunity for me to grow as a wrestler.

“Also, he’s arguably the best independent wrestler in the world. To be able to rub shoulders with him and get my name out there alongside his is definitely a big step up for my career.”

Banks will spend three months in North America on the road with Richards, travelling with him to shows across the continent including ROH’s return to Toronto, Ontario, Canada on August 3.

This will be Banks’ second overseas tour, following a three month stint in Tokyo-based Pro Wrestling Zero1 which he returned from in February of this year.

2013 has been good to Banks. The 26-year-old wrestled NJPW’s King Fale – who has also spent time training under Richards – at IPW Genesis in March and won the IPW New Zealand Heavyweight Championship at A Decade of Impact the following month.

Banks will depart for St. Louis on July 15.