Evie to Eagles: ‘Don’t underestimate me’ 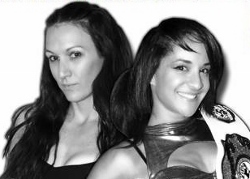 Evie has three words for PWWA Champion Madison Eagles ahead of their title unification bout tomorrow night: “Don’t underestimate me”.

“I think I will be the underdog but I am going to fight for that title,” Evie told WrestleHustle Radio ahead of her main event bout.

“[I am going to] get rid of the ‘interim’ word and just be the PWWA Champion.”

Evie’s reign as PWWA Interim Champion began roughly one year ago while Madison Eagles was out of action with a knee injury.

As interim champ, Evie has turned back challenges from Jessie McKay, Kellie Skater, and Shazza McKenzie.

“Everyone’s been talking about the possibility of the unification of the titles, and I had to continue to defend the title before I got to face Madison,” Evie said.

“I had to hold onto the belt, and now that I have, it’s definitely been a long time coming.

“Madison Eagles is] number one on my list of wrestlers to face, she’s on my wrestling opponent bucket list, and the fact it’s actually happening, it’s exciting.”

“It’s, like, the highlight of my year,” she told NHB Girls.

“Evie had done [PWWA] and she’s a massive idol of mine. I want to follow exactly in her footsteps.”

It is not yet known who Olivia’s opponent will be, but the element of surprise could work in her favour, she said.

“They have no idea what to expect from me so they should watch their back.”

New Zealand-born Storm will also be part of the Champions United event.