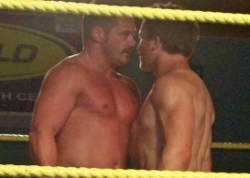 Travis Banks has earned his place in the main event of Nightmare B4 Xmas with a win over Tykade this past Saturday at IPW Last Chance.

Banks pinned Tykade in the night’s featured contest and will now look to do the same when he faces “The One” Vinny Dunn for the IPW Championship in a Fans Bring the Weapons bout on December 7.

Dunn served as the Interim Head of Live Events at Last Chance (Steve Wrigley was unable to attend) and wasted little time in appointing himself special referee for the night’s main event.

It looked as though Banks would be in for an uphill battle as bell-time approached.

Dunn refused to ring the bell and start the match when both men entered the ring, allowing himself to retain a slight sense of impartiality when Tykade attacked Banks and dragged him out of the ring, brawling through the crowd in a scenario that would almost certainly have led to a disqualification or count-out had the match been underway.

Once both men returned to the ring and the bell finally sounded Banks was able to build some momentum against Tykade, using his quickness to his advantage.

Every time it looked like Banks might be able to take the big man off his feet though, Tykade would counter, rattling Banks with an elbow when Banks launched himself off the top rope, for example.

Banks changed his strategy and tried to secure a submission victory with an armbar on Tykade. However, Tykade’s size made it easy for him to reach for a rope break, and Dunn wasted no time in physically dragging Banks off of the “Bigger Figure”.

Banks stayed on the attack regardless, capitalising when Tykade collided with the ring post and drilling his opponent with a forearm in the corner, followed by a facebuster and a flying knee strike.

Banks then took to the air for a cross-body press, but Tykade turned the tables on Banks in a second aerial assault when he flung the former IPW Champion sky-high and caught him for a brutal powerbomb.

The move could only keep Banks down for a two-count though, even with Dunn officiating.

Banks then latched onto Tykade and attempted to bring him to the mat with the Lion Clutch. Tykade struggled but couldn’t shake his tenacious opponent and ultimately succumbed, falling to the mat trapped firmly in Banks’ punishing submission.

The Agents of Change, Aaron Henry and Jakob Cross, rushed to the ring, and Dunn turned a blind eye as the two attacked Banks to free Tykade from the Lion Clutch.

James Shaw, who had been banned from the building earlier in the evening, then hurtled through the crowd to the ring to prevent a four-on-one assault on Banks.

Shaw outwitted Cross, Dunn and Henry, sending each man out over the top rope before wiping them all out with a suicide dive to leave Banks and Tykade alone in the ring.

IPW official Lloyd Morgan made his way to the ring to oversee the rest of the match just as Banks bundled Tykade (fighting to avoid the Lion Clutch again) into a small package for the win, claiming the number one contender’s spot and a main event, Fans Bring the Weapons, IPW Championship match at Nightmare Before Xmas.