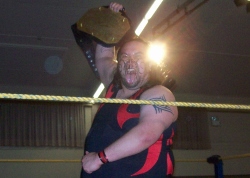 Ben Mana retained the NZWPW Championship in the main event of Legends Reunion this past Friday, countering a submission attempt from Adam Avalanche to catch him with an inside cradle for the win.

In the same venue which Mana first saw Avalanche win the NZWPW title years ago and was inspired to become a wrestler himself, the Modern Maori Warrior put what is now his title on the line against his former friend.

With New Zealand wrestling legends including Bruno Bekkar and John da Silva watching from the ringside area, the bout’s turning point came when Mana was able to get Avalanche off his feet with a backdrop, and follow up with a standing splash for a near fall.

Mana couldn’t lift Avalanche directly for a Mana Slam and dropped to the mat from the strain, where Avalanche looked to secure a submission victory with a modified cloverleaf.

Mana was more aware of his predicament than Avalanche may have thought, and the NZWPW champ rolled Avalanche over, using the Man Mountain’s own grip against him to bundle the challenger into an inside cradle for the victory.

As Avalanche left the ring, Mana grabbed a microphone and dedicated his title defence to the men and women of New Zealand wrestling’s past who had paved the way for today’s grapplers.

“This victory is a homage and a thank-you to the NZ legends,” Mana said. “Without you we wouldn’t be living the dream.”