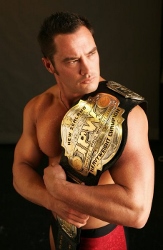 Dunn is a four-time IPW Champion, and has competed in four Fans Bring the Weapons matches in the past, with next Saturday’s main event being his fifth – the most in company history.

The self-proclaimed “Mr Fans Bring the Weapons” has gone toe-to-toe with The Machine, Joseph Kinkade, and “The Deal” Dal Knox in IPW’s signature bout, as well as wrestling a four-way featuring Knox, Dave O’Connor, and Jordan Invincible.

Dunn stepped away from the ring in November, 2012, but returned to IPW at Revival of the Fittest to claim his fourth IPW Championship, the title he currently holds.

NZPWI Editor David Dunn (no relation) spoke to Vinny Dunn about his decision to step away from the ring, and return, his history in Fans Bring the Weapons matches, his plans for this year’s Nightmare Before Xmas, his relationship with Steve Wrigley, and with Travis Banks, in an exclusive interview this past Thursday.

David Dunn: Recording now with the IPW Champion, “The One” Vinny Dunn. Vinny, it’s coming up on just over a year ago now when you retired last November; had your last match – what we thought was going to be your last match – against Jordan Invincible. Then IPW looked like it was on its last legs, had their last show – at the time – in April but reopened in July and, shock and surprise, you came back and you picked up the IPW Championship. So I want to talk to you about what changes happened in your life…

Vinny Dunn: First of all, David, I would like to thank all the fans and the people around the world listening, because when “Te Tahi” Vinny Dunn comes on the airwaves, the people want to listen, and it’s pretty basic, the New Zealand Heavyweight Champion. Of course, I had my retirement match against a great professional wrestler, Jordan Invincible, probably one of the men that I would say that I’ve got a lot of respect for. At the time I thought it was time to hang up the wrestling boots, but I saw that Impact Pro Wrestling was going down the toilet. Steve Wrigley and the investors, they came to me and they said “Vinny Dunn, we’ve got a backer, we’ve got bit more money, would you be interested in coming back on board?” So I had a think about it, I had a bit of a break, felt quite rested and ready to come back. Basically I took the contract, came back, won the belt for the fourth time, and that takes us to now.

What’s your relationship with Steve Wrigley prior to IPW’s relaunch? Do you know the man, or did he just approach you out of the blue as one of the few New Zealand wrestlers he knew of?

Steve Wrigley, of course he knows Vinny Dunn, and of course I know Steve Wrigley. He’s pretty much one of the top comedians here in New Zealand. I look at Steve Wrigley and I think [he is] a visionary, a real man’s man, one of nature’s gentlemen. He came to me and we went round to Ponsonby and had a coffee and he put the contract in front of me and said “Vinny Dunn, we want you back. We want the franchise player, we want the number one man, the man who brings ratings, ‘Te Tahi’ Vinny Dunn.” When you’re sitting there and you’re looking into Steve’s eyes like I was – he’s got a pretty nice smile – I was pretty taken back and I thought Steve and I, we could make pretty good music together.

The two of you certainly have over this past half a year.

It’s been brilliant, hasn’t it? Especially those guys like James Shaw getting what James Shaw deserves. It’s been beautiful music, David. Beautiful.

You don’t feel sorry for James at all? There must have been a time when you were coming up trying to win the IPW Championship for the first time – you can’t sympathise with James in any way?

I can, I can. Between you and I, and the rest of the dogheads listening… James Shaw, I have a lot of respect for him. The guy’s got heart, he’s a very good wrestler, but he’s just not Vinny Dunn. You’re putting a cat versus a lion; it’s not going to happen. He will become the New Zealand champion, he will win it one day. But when I’m on top, which will be for as long as I choose to be, he won’t be on top. That’s just the cold hard reality that he, and probably the rest of the locker room, are going to have to understand.

Another man in that locker room is Travis Banks, and of course you’ll be wrestling him in the Fans Bring the Weapons match. What are your thoughts on Travis, Vinny?

What are my thoughts? I will tell you now, I don’t have any respect for Travis Banks. I want you to think about this… Impact Pro Wrestling went down the toilet, they had to close their doors. Then they got a backer, they said “Travis, we need you here.” What did he do? He went and chased some stupid little dream in America, wrestled in front of about five or six people, and did absolutely nothing. He left the company high and dry. I’ve got no respect for Travis Banks. James Shaw, yeah, I’ve got respect for him, but not Travis Banks. He left this company, he left New Zealand professional wrestling to go and wrestle in some little gym in front of five people in America. It doesn’t impress me. It’s an ego thing. I don’t have an ego, I’m just good. But Travis Banks, it’s his ego. He thought he was better than us, and that’s why I don’t have any respect for him. So Travis Banks and I, Fans Bring the Weapons, December 7th at Lynfield Rec Centre, I’m going to beat that little pint-sized midget up. I’m going to beat him, I’m going to bloody him, I’m going to break some bones, and then I’m going to tap him out, and then I’m going to stand there over him still the New Zealand champion. Travis Banks and I, we don’t see eye-to-eye at all.

Let’s talk a little bit more about Fans Bring the Weapons as a match. You’ve been in five of the 10 in company history which is a phenomenal achievement, no one else has that sort of experience in this match. What can you tell me about this match? How does it compare to anything else that you’ve been involved with before in terms of stipulations? And any amazing, weird things that people have brought?

Well, to start with, Fans Bring the Weapons, it is the marquee match. It is a match that you just want to see. If you’re watching it, you see two competitors – or there’s been four ways, four competitors – just going absolutely mental. There’s ladders, there’s chairs, there’s thumb-tacks, there’s barbed-wire, there’s people jumping from stupid heights, there’s even people that bring baguettes! There’s trolleys, I think I even saw a doghead there. Fans Bring the Weapons is a match that people want to come and see because the two wrestlers who are in that match give every single little bit that they have. I’ve been in five of them, I’ll be walking into my fifth one, and I’ve got scars all over my back, I’ve got scars on the top of my head, I still get pain from some of the matches that I’ve been in. For me, Fans Bring the Weapons is the Mecca and the marquee match here in New Zealand professional wrestling.

Are you concerned about the physicality? You say you’ve been scarred up and banged up from these past ones, are you worried about the state you might be in come December 8th?

Of course I am. This is the one match where you are going to get really badly hurt. You’ll jump off things, you’ll get hit with foreign objects. These fans, they dream up and bring these crazy weapons along, and we hit each other with them. It’s a crazy, amazing match, and I wouldn’t be human if I didn’t say that I was a little worried. But the thing is, I’ll bring my game face. The adrenaline will be going. The disdain that I have for that midget Travis Banks will be enough to get me through.

There’s no sort of insurance policy with perhaps Tykade or Steve Wrigley, who you’ve been quite close with over the past few months?

What do you mean? What are you trying to say?

I’m just saying, should we be concerned that either of them might show their face?

This is the rubbish that I’ve been hearing in the locker room. This is the rubbish that I’ve been hearing with these fans. All these fans seem to think that I’ve lost my heart. These fans seem to think I need help. Do you realise I’ve won more IPW titles than any other professional wrestler here in New Zealand? More than your legend Kingi, more than “The Deal” Dal Knox, more than The Machine, more than Dave O’Connor, more than any of them. Do you understand that, David? More than anybody. That puts me in a league above everybody else. And then you, you’re insinuating I need help. The people at home listening, insinuating and whispering that I need help. I am Vinny Dunn, I’ve wrestled in America, Canada, all around this great world. I’ve been ranked the top wrestler in New Zealand countless times, People’s Choice wrestler of the year countless times, ranked in the top 500 wrestlers in the world, held so many damn titles, and people are trying to question whether “Te Tahi” has still got it. I’m going to tell you now, December 7th, Lynfield Rec Centre, I will bring every single little bit that is “Te Tahi”. I don’t need “The Bigger Figure” Tykade’s help, I don’t need Steve Wrigley’s help, I will go out there and I will prove yet again why I am the man. Do you understand that, David?

I do, sir, and I apologise for questioning you. Now you yourself have said despite all these title wins, despite all these Fans Bring the Weapons matches you’ve been involved with, you’ve said on your Facebook page that this one coming up at Nightmare Before Xmas, this is the biggest match that you’ve been involved with ever before. Why? What makes this match stand out against all others?

It’s because I had my time off, had my sabbatical, and I’m back. I’m back to show all these new fans that are coming back into the building because “Te Tahi” is here, and all the old ones that remember me, they’re coming back in their droves. I want to show New Zealand what I know myself, that I’m the best. I know that I’m the franchise player, I know that I’m the benchmark of New Zealand wrestling, but I am going to show them that I am definitely the best. When they turn up, December 7th at Lynfield Rec Centre, they will leave absolutely mesmerised. They will leave absolutely pumped up. They will leave knowing without a shadow of a doubt that I am better than Travis Banks and that Vinny Dunn is the real New Zealand Heavyweight Champion.