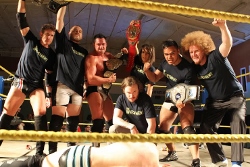 Travis Banks has been screwed out of a championship victory against Vinny Dunn by a new group known as The Investment.

Banks came out on top, and Dunn attempted to escape by running around the ring. Unfortunately, this was Fans Bring the Weapons; nowhere was safe.

As fast as Banks could reach for them, the strangest of weapons were being used to his advantage. A wooden tube, a toaster, a cabbage, and a Hulk hand were used in quick succession by the number one contender. A plastic table would then be used to prop Dunn up on the outside, allowing Banks to hit a devastating dropkick from the apron.

Eventually, Dunn managed to turn the match back around by forcing a ladder that Banks was going to use into his own face. Dunn would then hit a massive spear, but Banks was somehow able to kick out at the referee’s two-count.

Dunn would attempt to follow this up with the Muscle Buster, but Banks managed to roll through for a pinfall attempt and also getting a two-count.

At this point, everything turned to chaos. After Banks drove Dunn through a table by diving on him off a ladder, Pat Schisk and Curt Chaos came down to the ring and attacked the sure-to-win contender.

Banks managed to retaliate using technical skill and weapons to his advantage, but before he could get in the driver’s seat the Agents of Change came to the ring and also attacked him.

As all hope appeared to be lost, Daniel Burnell (Head of Live Events for the evening in Steve Wrigley’s absence) and Evie stormed the ring to save Banks. The two were clearly outnumbered and in a dire position, but the look on their faces was one not of fear.

It turned out the reason for this was because Burnell and Evie were in on the entire thing.

Evie ran around the Agents of Change and hit Banks with a massive Yakuza Kick in the corner. She then pulled Dunn over Banks, and Burnell knocked out hesitant referee Lloyd Morgan before making the three-count himself.

The Investment is now seemingly running IPW, with both the administrative head and all the promotion’s champions.

Evie regained the IPW Women’s Championship at the start of the night when Burnell announced a triple threat elimination match to determine the true women’s champ, after Emmy Driver quit at Last Chance.

Olivia Shaw was the first to be eliminated, submitting to Britenay after Evie refused to make the save.

Britenay looked poised to eliminate Evie as well, but the referee had been knocked down. This gave Evie the opportunity to turn the tables and hit Britenay with the TTYL. With the referee still down, Burnell was forced to take matters into his own hands and make the three-count.

The next sign of things to come, in terms of The Investment, was in the tag team title match.

Lil T was then handcuffed to the top turnbuckle without any chance to make the save for partner TK Cooper. Cooper was hit with a double crucifix powerbomb and the Agents of Change regained the championships immediately.