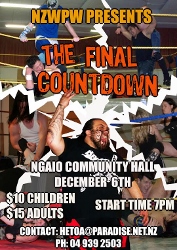 NZWPW ends its year in style tonight with a triple threat bout between the KPW, NZWPW and SCW Champions.

Mana, Rufguts and Sinclair were originally scheduled to wrestle at KPW Halloween Howl 7 but a last minute change saw the three join forces in a winning effort against their number one contenders.

Tensions boiled over last week at Bringing Down the House though, when Sinclair left his position in the audience to attack Mana after his title defence against KPW’s Kade Morgan.

Rufguts then threw his name into the mix as the two began to talk about a champion versus champion bout, leading to NZWPW CWO Rehua making this historic triple threat for tonight in Ngaio.

While no titles will be on the line, the pride of all three men, and the organisations they represent, will be. Who will emerge as the champion of champions when all is said and done?

Another title bout is scheduled for The Final Countdown, with Scarlett defending her KPW Women’s Championship against Misty.

Scarlett claimed her title last month at Halloween Howl 7 and has already defended the cup once, but Misty is sure to be her toughest challenger.

Scarlett and Misty know each other well. The two have wrestled around the lower North Island, trading wins. Tonight’s bout will be the most significant of them all – the first time a title has hung in the balance.

Will Scarlett defeat Misty in what could be considered an upset, on NZWPW soil, and continue her title reign, or will Misty make history and pick up her first title?

Plus, the tournament for the He Toa Cup continues, with Mikey taking on Skull Kid, and “Dream Catcher” clashing with Taylor Adams. Who will start 2014 just one win away from the vacant He Toa Cup?

NZWPW The Final Countdown takes place tonight, December 6, at the Ngaio Town Hall, Ottawa Road, Ngaio. Click here for a map. Doors open at 7pm, with the first match scheduled for 7.30pm. Tickets are available on the door ($15 for adults, $10 for children). The card, subject to change, is listed below.