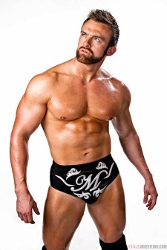 Magnus returns home to the United Kingdom for TNA’s Maximum Impact tour at the start of next year, and is on the cusp of doing so as a world champion.

“I do see myself rolling into the UK tour as the world champion, because you have to look at it that way. You have to believe you’re able to hold the title and carry the title because otherwise you’re never going to convey that to the audience.”

The 27-year-old Brit is currently involved in a tournament for the TNA World Heavyweight Championship (made vacant when then-champ AJ Styles’ contract expired), facing off against former titleholder Kurt Angle in the semi-final stages.

All going well, Magnus sees no reason why he shouldn’t either emerge from the tournament with the title, or be in a position to have claimed it by the end of the following year.

“I feel like if I hadn’t been world champion by the end of 2014 something may have gone wrong.”

It’s not an unreasonable thought process. Despite his young age, Magnus is a former GHC, IWGP and TNA tag team titleholder (alongside partners Doug Williams and Samoa Joe) as well as the second man to hold the Ring Ka King title.

“I loved holding the Ring Ka King title,” he admitted during a conference call last week.

“That meant a lot to me in that it was Jeff Jarrett and that team … they put their faith in me, Jeff was the first guy to put his faith in me as the guy who could carry the belt, so that was very important thing for me, it meant a lot. That was a good roster and there was a lot of good candidates who could have been used for that role, so I was very grateful that he did that for me.”

India, Japan, and Orlando are all a long way from home for a boy from Norfolk, who began training at the now-defunct Dropkixx Academy in the early 2000s.

A young Magnus soon began to impress Doug Williams, who helped him to get bookings around the United Kingdom, and eventually the globe.

Despite being half a world away from home, Magnus still stays in touch with his fellow countrymen, like TNA’s Rob Terry and Rockstar Spud, and even his WWE counterparts.

“I hung out with Sheamus and Drew McIntyre a few weeks ago – we all went and had a few drinks together.”

Magnus is also close with Wade Barrett, who came through the same wrestling school as the TNA star.

“I’ve always followed him, and I think vice versa,” Magnus said of Barrett. “Every now and then I’ll get a random text from him seeing something I’ve done. The same could be said of any of my friends working up there, and vice versa, I’ll send a text when I see something … that’s just the way this business is.

“I’m very proud of [Wade Barrett] and in a lot of ways we both sort of relate to each other because both went through the early parts of our careers together. He’s got a few years on me, he’s a few years older than I am, but we went to the same school for a while and then we broke in through All Star like a lot of the guys did. I’m super pleased for him and I’m always interested to see what he’s doing. The same could be said for any of the Brits or any of my friends.”

While Barrett’s 2013 has been somewhat of a mixed bag, faltering after his Intercontinental Championship win the night after WrestleMania 29, Magnus seems to have gone from strength to strength. 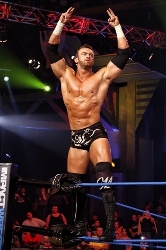 “2012 was my milestone year, then 2013’s been my breakout year. 2012 was when I was given the opportunity to showcase myself, first in the team with Joe then in the rivalry with Joe. I exited 2012 in quite controversial fashion which gave me a great opening to come back at the beginning of 2013 with a tonne of momentum … as a result of that I just kind of solidified myself as more of a player. That’s all I tried to do this year and obviously this year the company really jumped on that and gave me plenty of chances to have the spotlight. First in the BFG Series and then wrestling Sting…”

Another breakout moment for Magnus came when he was recruited to be part of Sting’s new Main Event Mafia.

“The stable, the faction, whatever you want to call it, will always be a useful tool because it’s a good way to showcase a lot of people in a creative way without making everybody wrestle,” Magnus said.

“We don’t have the time to have everybody wrestle matches and be featured for long enough to get established, which is the number one most important thing: getting your face on camera so that allows people to remember it. The stable allows that to happen.”

Magnus had the opportunity to be featured, and featured in the highest profile feud in TNA at the time, alongside legendary figures like Sting and Kurt Angle, as well as his old tag team partner Samoa Joe.

“Without a doubt my favourite stable I’ve been apart of was the Mafia … at the time when I came in the original Main Event Mafia was there. I remember looking at that and thinking ‘That looks like fun’ and then when they invited me to join it this year I was all about it. I had great fun doing that.

“I think some of the most fun I’ve had in wrestling was just doing the Mafia entrance. I know it sounds silly but just doing the Mafia entrance in all the places we did, going out getting these custom-made suits, hitting the music and just strutting out there with three huge-name guys was just so much fun. People’s reactions, it’s a different kind of pop. You can feel people’s interest and energy building all the way down to the ring … that’s cool, that’s a really cool thing.”

The undoubted highlight of 2013 came when Magnus met Sting one-on-one, in what some fans have called a passing of the torch.

“I was sort of an up-and-coming, conflicted character,” Magnus said of the match.

“All I am at this point is I’m concerned about winning, just concerned about trying to get the result and establish myself whereas Sting is such a legend and an icon in our business. He’s always been a supporter of mine. I think that in the grand scheme of things I will always see it not so much as Sting passing the torch but as Sting giving me his stamp of approval. He’d done it privately to me in person, and he’d done it some interviews and stuff, and I think he wanted the opportunity to do it in a very real way. He said to me afterwards, and he’s said it several times since, ‘I always wanted to wrestle you and to do it right because I think you deserve it’ and I will always appreciate that from him.”

(Sting tipped Magnus as a future star when he spoke to NZPWI in April, 2012.)

Outside of the ring, Magnus is brushing up on his French and looking into foreign exchange trading. He also writes a monthly column for Fighting Spirit Magazine.

Despite the highs he has reached, Magnus refuses to become complacent. The Brit says there is no guarantee he will be welcomed with open arms when he returns to the UK in 2014.

“There’s never any assurance in this business that that crowd is going to give me that particular response. Complacency can often take the place of confidence when it comes to a crowd reaction … Although it may seem fairly close it’s still eight episodes of television away and a lot can happen in eight episodes of television. I would reserve judgement on that until we get there and see where we are.”