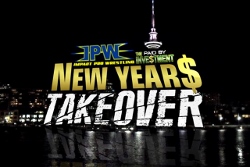 The IPW New Zealand Heavyweight Championship will be on the line this weekend at New Year’s Takeover when Vinny Dunn defends his title against two of his fiercest rivals, James Shaw and Travis Banks.

Dunn screwed Shaw out of a championship victory for a number of months last year. From the time IPW was relaunched in July through to October, Dunn cheated in every way imaginable to defeat the upstart fan favourite.

Meanwhile, the debut of The Investment prevented Banks from a sure victory at December’s Nightmare Before Xmas.

Dunn had managed to secure friends at every turn to ensure he would remain champion. One of those friends, Investment member and IPW Women’s Champion Evie, hit a massive Yakuza Kick on Banks in a move no one expected, handing Dunn the win.

Dunn will be outnumber in Saturday’s main event, but it is every man for himself at New Year’s Takeover. As much as Banks and Shaw may want to work together, only one man can walk away with the IPW title.

Can either Banks or Shaw leave with their second New Zealand title, or will Dunn hold onto the IPW Championship and extended his record-setting fourth reign with the belt into 2014?

Evie reclaimed the IPW Women’s Championship at Nightmare Before Xmas in a triple threat bout against Britenay and Olivia Shaw.

With both of these wrestlers defeated, Evie is slated to defend her championship at New Year’s Takeover against a mystery opponent. It is unclear as to who it could be, although it is assumed Evie will face new competition after her previous victory.

Also of note, a message has been posted on the IPW Facebook page by a group who call themselves “The O”. The message speaks of how The Investment is trying to build an empire on the backs of those who truly made the company.

The message concludes, “We are the bricks. We are the mortar. We are coming for you.” Time will only tell what this means, but The Investment now has even more reason for concern on Saturday night.

With all this, and the long-awaited return of Liam Fury, New Year’s Takeover is shaping up to be a must-see event for New Zealand wrestling fans.

IPW New Year’s Takeover takes place this Saturday, January 11, at the Mt Albert War Memorial Hall. Click here for a map. Doors open at 6.30pm with the first match scheduled for 7pm. Tickets are available at the door ($15 for adults, $8 for children). The card, subject to change, is listed below.