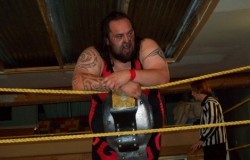 Ben Mana retained the NZWPW Championship against his hand-picked opponent Mikey at Friday’s Bringing Down the House 36 event.

Mikey took to the ring to announce he had been left without an opponent in the tournament final for the He Toa Cup, with Taylor Adams still in the South Island “shearing sheep”, and declared himself to be its new rightful holder.

Before he could take the cup and leave, Ben Mana came to the ring and made Mikey a better offer, giving him his first shot at the NZWPW Championship.

Mana got the best of Mikey when the bell sounded and forced Mikey out of the ring to regroup. Upon returning to the ring, Mikey was able to snag Mana’s knee – which has a history of injury – in the ropes and drastically change the course of the match.

Mikey slammed Mana’s knee against the ring post to further damage the surgically-repaired joint, before antagonising Mana with a haka.

This motivated Mana to fight through the pain and drop Mikey with a Maori Spike, but the NZWPW Champion took too long to make a cover, meaning Mikey was able to kick out at the referee’s two-count.

Mana called for a Mana Slam but Mikey was ready and swept Mana’s knee before locking in a cloverleaf submission.

Mikey attempted a superkick after Mana made it to the ropes but the NZWPW Champion caught Mikey’s foot and rolled him into a Mana Lock.

Mieky was able to break free with the help of the ropes and ran at Mana, perhaps looking for a wheelbarrow bulldog, before being powered into a Mana Slam, hitting the canvas hard. Mana then covered Mikey for the three-count, to retain the NZWPW Championship.

Mikey threatened to cut Mana’s celebration short with a guitar shot, but NZWPW CWO Rehua passed Mana his taiaha to defend himself. Upon seeing Mana wielding the taiaha, Mikey hastily left the ring.

NZWPW Bringing Down the House 36 Results: