Banks retains in The Ultimate Match 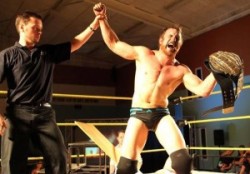 IPW’s The Ultimate Prize saw The Ultimate Match contested between two of New Zealand’s premier wrestlers for the New Zealand Heavyweight Championship. In the end, Travis Banks would retain his championship against his friend James Shaw, three falls to two.

Before the match began, the rules were explained: a 30 minute ironman match where the first 20 minutes would be contested under normal wrestling rules while the final 10 minutes would be no disqualification. The two shook hands and the bell was rung.

For the first few minutes of the match, neither competitor could gain the upper hand as they traded clean holds in some pure chain wrestling. However, after a bit of tomfoolery by Shaw, Banks gained the upper hand and the first fall following a roaring knee strike and a fisherman’s brainbuster.

With only four minutes gone, it looked as though this could be a rather one-sided affair. Banks then picked up Shaw and told him he was going to have to bring his A-game if he wanted to win. Shaw then tried to fight back, but Banks maintained control with a series of hard strikes, brutal chops, and near falls.

Banks then proceeded to lock Shaw in the tree of woe. The upside down Shaw was unable to defend himself against a series of brutal kicks to the torso. Banks then took to the top rope and attempted to crush the chest of his foe with a diving double foot stomp that drove Shaw straight into the mat.

While Banks attempted to continue his domination, Shaw took an opportunity to try and roll the champion up. However, Banks was quick to turn this into an opportunity of his own by reversing the roll-up into a half Boston Crab. Shaw, not one to give up so easily, made his way to the ropes to break the submission opportunity.

As Shaw made his way back to his feet, Banks attempted to run at the contender only to be knocked back down with a huge side slam. Rather than allowing Shaw any momentum, Banks rolled to the outside to try and get a breather. When Shaw tried to reach down for Banks, the champion pulled Shaw’s feet out of under him and pulled him to the outside too.

With Shaw down on the outside, Banks attempted to slingshot him over a guard rail and into the fans. However, as Shaw flung over the rail, he grabbed hold of it to slow his momentum and land on his feet. As Banks turned around, Shaw spring boarded off the rail and landed on Banks with a diving double axe-handle.

Unfortunately for Shaw, his momentum was short lived. After rolling Banks into the ring, he attempted to hit a running elbow in the corner. Banks would duck under the elbow and take hold of Shaw’s waist. Without using any momentum, Banks performed an amazing deadlift German suplex dropping Shaw directly on his neck.

Banks then attempted to go high risk, but got no reward as he missed a diving crossbody. Shaw then tried to take the initiative picking Banks up for a DVD, but Banks reversed the finisher attempt into a butterfly suplex.

After both men slowly got back to their feet, Shaw took control by hitting a series of chops and turning Banks’ chest 11 shades of red. He then hit what could best be described as a loop-de-loop spinning neckbreaker. Shaw then hit the Shawshank Redemption but could only score a two count.

Shaw also failed a high0risk move when Banks rolled out of the way of a diving moonsault. Using the opportunity to take back control, Banks took Shaw to the outside and hit a sick suplex on the hardwood floor. As Banks re-entered the ring, it was declared that the no disqualification portion of the match had begun.

Banks waited on the inside of the ring to have a breather which allowed Shaw to also re-enter. Unfortunately for Banks, Shaw surprised everyone by spraying black mist into the champion’s eyes. Shaw then used the opportunity to hit the DVD and grab a pinfall, evening the score, 1-1.

However, as Shaw was lying across Banks, the champion made the most of the situation by forcing Shaw into a crucifix pin and regaining the lead. Shaw beat down Banks a bit more, and then exited the ring to grab a table. The two would then go back and forth trying to suplex and slam each other through the table.

With neither willing to go through, Shaw sent Banks to the outside and attempted a suicide dive. However, Banks reversed the attempt with a big strike to the flying Shaw sending him to the ground in a heap. Banks then took his opponent back into the ring only to be rolled up for a pinfall out of nowhere. The scores were now even, 2-2, with only minutes ago.

Despite being pinned, Banks was still the healthier man and downed Shaw with a second roaring knee strike and a second fisherman’s brainbuster. However, Shaw would not let his shoulders stay down for the three count.

Banks then tried to take to the top rope, but Shaw momentarily took control. Shaw decided to go high risk again, attempting a superplex on Banks through the table. However, Banks dropped down from the turnbuckle and hit a devastating powerbomb through the table on his opponent. With less than 10 seconds to go, Banks scored the final and deciding pinfall.

Banks had successfully retained his championship, and the event ended with the two friends shaking hands.