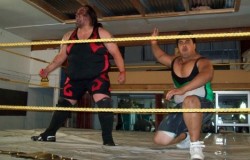 Ben Mana remains NZWPW Champion after a heated battle with Axl at Bringing Down the House 37.

Axl was not the only man Mana had to contend with though, as “Rufguts” Roddy Gunn attempted to cash in his Right 2 Challenge directly after the match.

Mana endured a lot of punishment from Axl, and was bleeding from the forehead by the time he put Axl away with a Maori Spike.

No sooner had the bell sounded than Gunn, accompanied by “Dream Catcher” Phil Woodgate and JC Star, strode to the ring with his Right 2 Challenge contract in hand.

Gunn handed the contract to referee Damian Skyfire and things appeared almost official, but D-Hoya raced to the ring and scattered The Nobodies, stopping his long-term rival “Rufguts” from taking advantage of Mana’s weakened state.

D-Hoya and Mana then performed a haka to further show their unity as The Nobodies retreated, waiting for another day to enact their master plan.

Mikey claimed the He Toa Cup after bending the rules in his tournament final match with Taylor Adams.

Whether accidentally or not, Mikey collided with referee Damian Skyfire in the corner of the ring, temporarily knocking the official unconscious.

Taylor Adams would then knock Mikey unconscious with a spinebuster, but with no referee to count the pin the match continued.

Mikey rolled out of the ring and grabbed his guitar while Adams tried to revive the referee.

With Skyfire stirring, Adams reached through the ropes to bring Mikey back into the ring and was met with a guitar to the face.

Mikey then rolled Adams up, complete with a handful of the southern man’s trunks, to secure the win and take home the vacant He Toa Cup.

NZWPW Bringing Down the House 37 Results: