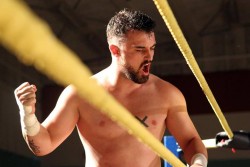 Liam Fury has won the 2014 IPW Eliminator and will receive a match for the IPW Championship at the time of his choosing.

Fury and Curt Chaos were the final two men left in the bout when it transformed from a battle royal into a one-fall-to-a-finish contest. Fury pinned Chaos following a shooting star press.

“I was off with an injury for seven months and the truth is I thought it was over,” Fury told the Genesis audience post-match. “I thought it was time to move on to something else, but a close friend told me I didn’t seem as happy [without wrestling] as I was … so I made the decision and I came back in January and I’ve been on one hell of a roll since then and it’s all because of you, thank-you so much.”

Fury also had a message for current IPW Champion Travis Banks regarding their future title match.

“I don’t know when I’m going to cash it in, but let’s do what we do and make history next time we’re in the ring together,” he said.

Banks is not the only IPW title holder with a championship match to think about following Genesis. IPW Tag Team Champion Jakob Cross finally caved to TnT’s demands for a ladder match, meaning the Agents of Change will defend their titles at IPW’s next event.

Fans were given a preview of things to come when both the Agents of Change and TnT found themselves in the IPW Eliminator at the same time, and TnT used a ladder to send Aaron Henry and Jakob Cross over the top rope.

Cross grabbed a microphone after he and Henry had been eliminated and told TnT he accepted their challenge. Both teams will meet in New Zealand’s first tag team ladder match next month.