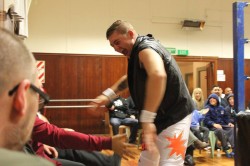 “That Young Warrior” Paul Sayers is stepping away from the ring after last Saturday’s NZWPW Live Pro Wrestling event, putting his eight-year career on hold to tend to some nagging health issues.

Sayers lost to Chad Howard in NZWPW’s first tables match, the main event of the night, as well as opened the show with a tag team title change when he and Howard were beaten by Hayden Theile and Jade Priest.

NZPWI Editor David Dunn spoke to Sayers to get the full story on his decision to stop wrestling, as well as get some perspective on the 21-year-old’s eight years on the New Zealand wrestling scene.

David Dunn: Why are you stepping away from the ring?

Paul Sayers: It’s not something that I want to do, it’s more something that I have to do, for now, anyway, because my right shoulder-blade is no longer properly connected to my spine. It’s kind of wrapping around the front of my body a little bit. I don’t know what that’s from or why it’s like that but it is there so it’s something I just have to make sure can come back into place otherwise, if I don’t give it time to rest it’s highly unlikely it’ll move back to where it should be. So for now until my shoulder-blade decides it wants to sit back where it’s meant to, that’s it, pretty much. And if it doesn’t want to move back, then it doesn’t want to move back.

Is that a result of wrestling?

I can’t figure out what it actually is. There’s a couple of things that it could be. When I was younger I broke my leg. I broke my foot when I was having my growth spurt, so now one of my legs is longer than the other a little bit and I’m kind of thinking it might be that. It could be from when Evie kicked me in the head, and it could just be from starting out too young. It’s heaps of things that come into play of what it could be, but I don’t know 100 per cent what it is.

Is this the sort of thing that could require surgery? Is it still functional in everyday life?

In everyday life apart from lifting things in certain positions it’s fine. Everything else is fine. I definitely think I can still wrestle with it in a different kind of way – I can kind of wrestle around it – but at the same time it’s still kind of risky to do that so I’d rather just not risk it and make sure it’s alright. The physio said as long as it’s been like that is probably the amount of time it’ll take to come back, and she reckons it’s probably been like that for about 18 months, so it’ll be close to 18 months before it could come back into place. She said it’ll never be 100 per cent again though. I always go on about wanting to pick up my kids when I’m older. As cliché and as stupid as that sounds it’s something I do want to achieve.

How old were you when you started wrestling?

What were your goals when you started training? Did you hope to make it to WWE or were you looking to just take part in local shows?

When I was younger I used to watch WWF and WCW on TV. I saw one WPW show, Pasifika. It was the first time I saw wrestling as something I could achieve in New Zealand. I never knew about it in New Zealand before then. I thought I’d have to save up heaps of money to go to America to figure out how to do it over there. It’s always something I wanted to do but never knew it was achievable in New Zealand. I saw a poster for Pasifika in Lower Hutt, went to that, thought it was real cool, then a couple of months later I saw an advert in the Lower Hutt paper about a training evening and I went to do that. I got all my friends to come and filled up my mum’s car, went over and started training.

You’ve recently got back from wrestling for Queensland Championship Wrestling in Australia. Did you image you’d get to the point where you’d be doing your third tour of Australia?

I did 2009 with Impact Pro Wrestling Australia where I wrestled Kelso Kahoniz. That show was just an add-on of my holiday. Everything was happening when I was over there so I figured I may as well have a wrestle. The second time I went over in 2010 when I faced Ashe for the South Pacific title in a best of three series was solely to go and wrestle. Then last weekend was on my wrestling bucket list ever since Jimmy [Sparx] opened QCW, to go wrestle for his promotion. In a sense as a thank-you for him training me when I was younger, helping me out and stuff like that. I wanted to go over there and wrestle his show so that’s why I went over that time just because I knew everything was going to come to an end and I wanted to make sure I did that first.

Tell me about your career highlights.

I have a couple of favourite matches that stick out for me. Myself versus Brother T in Wainuiomata. For me that was just super cool because it was in my home town and a place I love heaps against my best friend, and a real cool match, I felt. That match for me was kind of the turning point of me taking it more seriously because it kind of showed me I can do that sort of wrestling instead of just taking the piss all the time. That was a cool match for me that stuck out heaps.

My match with Joeseph Kinkade in Blenheim was another one of my favourites. I always wanted to wrestle Joe… he was the first guy in New Zealand wrestling that I really liked when I saw him at Armageddon years ago. To finally wrestle him was super cool, and to have a real cool brawley match which is what I like doing now days.

Do you think you got what you wanted out of wrestling?

Winning a singles strap in New Zealand or Australia was another thing on my list of things, and there’s a couple of people that I want to wrestle that probably won’t happen now, but other than that I’m happy as can be with what I’ve done. I feel like over last year and part of this year I really developed into – not a good wrestler per se, but a good entertainer. And I feel like it’s been a good time of my life outside wrestling and in wrestling over the past year and I bit, so I’m happy it’s ending on this note. For everybody that knows, my past with Martin has been shocking. I’ve been kicked out of WPW a couple of times but me and Martin are tight on a personal and business level at the moment now so everything is ending on a good note for me.

It’s dumb I wont get to wrestle the likes of Dave [O’Connor] and JC [Star] and Jimmy [Sparx] who are like the three left on my list, but other than that I’m stoked. I still got to win the tag titles, and if you look at past title winners, people that have been in those teams have gone onto real cool things. JC Star, Travis Banks, Rufguts, James Shaw, and Johnny Idol have all gone on to hold singles straps, and have done real well. So even to be put into that category was cool.

Do you think you’ll come back if your shoulder heals in a year or two?

I definitely think if my shoulder does come right I’ll come wrestle again. I don’t know to what extent. I might just pop in for Wainuiomata shows because they’re cool, or pop in for a Power Play, or go have fun at Armageddons or something like that. Who knows? It could come fine in six months time and I’m just back to it normally. It could be a year and I’m back to it normally, it’s kind of all up in the air.

I’m still going to find things in wrestling where I can be involved. I’ve taken on marketing stuff in WPW at the moment, organising shows and doing social media and stuff like that. There’s a lot of things I can do behind the scenes. I’ll probably commentate shows and stuff like that as well. I’m still going to be involved – there’s a podcast that I want to do – there’s definitely things I’ll still be involved in. I’ll still be at shows if that can happen.

Sayers to wrestle NJPW’s Goto at On the Mat

It appeared event organisers had already made their decision, but overwhelming support from the New Zealand pro-wrestling community has earned...