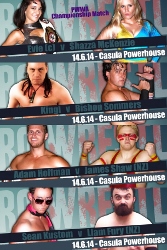 Evie wrestles the most significant match of the four New Zealanders, defending her PWWA Championship against Shazza McKenzie.

Evie has held the PWWA Championship since August 2013 when she defeated Madison Eagles at Champions United.

Shazza McKenzie has overcome almost every woman on the PWA roster to assert herself as the number one contender to Evie’s title, and will be looking to make Evie’s carry-on luggage a lot lighter for her return trip to New Zealand, sending her home without the PWWA Championship.

Kingi, now living in Sydney, takes on Bishop Sommers in a match that could have title implications for the New Zealander.

Kingi drew with former PWA Champion Ryan Eagles at Theory of (Neo Soverign) Revolution in April, showing himself to be every bit as good as anyone else on the PWA roster.

A win over Bishop Sommers, who challenged Robbie Eagles for the title in April, could catapult Kingi into title contention and start him down the path to holding gold across the ditch.

Road to Ruin will be headlined by a no disqualification match for the PWA Championship, pitting Robbie Eagles against long-time number one contender “Real Man” Jack Bonza.