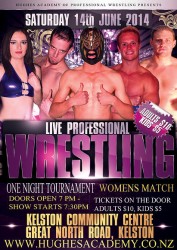 Eight men will compete for the opportunity to challenge Shane Sinclair for the Hughes Academy Cup tomorrow night in Auckland.

Live Pro Wrestling will host an eight-man tournament, with wrestlers from all over the country converging on the Kelston Community Centre.

The live audience will be responsible for selecting the quarter final matches of the tournament, with the eventual winner going on to face “The Shooter” Shane Sinclair for the Hughes Academy Cup in the main event of the evening.

Mana’s momentum is high after victories over both Axl and Hotaru last month, but he will need to be on form in order to retain his title against two highly skilled challengers.

Hughes Academy Live Pro Wrestling takes place tomorrow, June 14, at the Kelston Community Centre in Auckland. Click here for a map. Doors open at 7pm with the first match scheduled for 7.30pm. Tickets are available on the door ($10 adults, $5 children). The card, subject to change, is listed below.