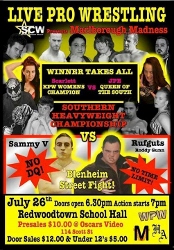 The number one contender’s position is not a new one for Sammy, who has been involved in the SCW title picture for a number of years.

It looked as though Sammy may finally graduate from contender to champion at last year’s Slam City 4 event when he took on Rufguts for the title, but Rufguts’ manager made sure the match ended in a premature time-limit draw, and denied Sammy any overtime.

As a result, the SCW match-making committee has sanctioned a Blenheim Street Fight for Marlborough Madness.

With the SCW Championship on the line there will be no disqualifications, no count-outs, and – more importantly – no time-limit.

There is no easy way out for Rufguts this time around. Whoever walks away from the Redwoodtown School Hall with the SCW Championship will have to have definitively earned their victory.

Also at SCW Marlborough Madness, the KPW Women’s Championship is on the line in an inter-promotional battle. Scarlett defends her title against Maniacs United’s Queen of the South, JPE, in a winner-take-all bout.

No further matches have been announced for SCW Marlborough Madness, but both Ben Mana and Charlie Roberts have indicated they will be at the event.