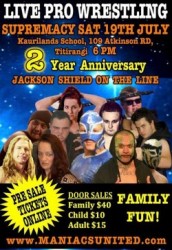 To mark the occasion, 10 wrestlers will compete in a gauntlet match with the winner taking home the newly-created Jackson Shield.

The Shield is named after two of Maniacs United’s biggest supporters, a spokesperson told NZPWI earlier this month.

Maniacs United regulars Dan Stryker, Hotaru and Kingston Eclipse are among the 10 wrestlers involved in the match, as well as KPW titleholders Bull Addams, Scarlett, and Stix.

Two wrestlers will begin the match, with eliminations taking place by pin, submission, disqualification, or count-out.

Another wrestler will enter the match when one has been eliminated until all 10 have stepped through the ropes. After nine eliminations, one man (or woman) will be left standing and awarded the Jackson Shield.

Maniacs United Supremacy takes place tomorrow, July 19, at Kaurilands Primary School in Titirangi, Auckland. Click here for a map. The first match is scheduled to start at 6pm. Tickets are available on the door (adults $15, children $10). The card, subject to change, is listed below.