Vince McMahon is a trailblazer. Sometimes that works: WWE. Sometimes that doesn’t: XFL, WBF, WWE Studios, anything else that isn’t WWE. So, here goes the latest endeavour. One that has to work, because once you go “over the top” you can’t… go… back under the… top. Look, I don’t really know what that phrase means. 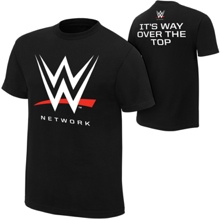 New Zealand won’t see the Network until late 2014 or early 2015. Thanks to the Apple TV in my home not being region-blocked, I entered my details and tried out the WWE Network. It’s fun. I binged. I watched Ricky Steamboat and Shane Douglas get destroyed by Barry Windham backstage. I giggled at Jesse Ventura’s outfits. I realised how much I missed Jim Ross on commentary. The potential to lose track watching it all for a week or nine is high.

Raw and SmackDown can’t be shown until 30 days have passed from airing, which is a massive loss to the overall appeal. Then there are huge holes in content. If you go back further than the last two years of those show’s existence, you can watch… one or two of them from each year. At an estimate, there are currently around 150 of the 1,100 Raws available. Those random episodes available are good choices though – Edge and Lita’s live sex celebration, the Angle/Brock Iron Man match, Milk-a-mania, the Undertaker trying to marry Stephanie McMahon, etc.

So, viewers who like the current product can’t watch the weekly programming when it comes out. Fans who like nostalgia will find massive gaps in older content. As happens many a time with their TV product, in an attempt to please everyone, they find themselves unable to fully please anyone.

WWE has often been accused of suffering a personality disorder. Its content leaps from ‘comedy’ segments where a midget in a bull costume has his tail removed, to a segment featuring a cult talking about the end of the world. The Network currently finds itself in a similar logistical position regarding its place in WWE. Before Raw starts there’s a half hour show leading into it on the WWE Network. Then to watch Raw, it’s on the USA Network. During the ads, you can watch Raw uninterrupted on the WWE App on your tablet. After Raw you can watch a half hour show about the events you’ve witnessed, back on the WWE Network. I’m dizzy explaining it. No wonder Cole is still telling people how to install an app.

For those who like WWE programming and want it to continue, it must not fail. They no longer have the trust of PPV providers and have cannibalised their share of that market to set this up. Their negotiations for channels to show Raw went poorly, after the Network picked up lower subscribers than expected; why would a channel want to pay lots of money to have Raw on it, selling advertising time, when the company can’t even get enough of their own fanbase to pick up their own product? WWE has lost hundreds of millions this year in the process of getting the Network off the ground and they can’t go back to charging $50-plus in the US now. Here in NZ, the concept of paying more than the $25 we do now would definitely kill off its remaining buys. WWE will probably only know how well this whole venture will pay off when it hits SummerSlam, as the initial six-month subscription period will be up. Will people renew? Are many more people picking it up? I mean, if they don’t, how else will they know what it looks like when the same world champion gets crowned over and over?

The Network’s streaming service is nice but basic. It’s 24/7… with one block. That one block repeats all day, instead of having several blocks over that 24 hour period. I wouldn’t have thought to watch some of Clash of the Champions 1992, so having it just crop up in front of you is fun.

They do have every WWE, WCW and ECW PPV as they said. Although they haven’t lived up to their promise that everything would be uncut and unedited. They get a pass on much licensed music, which was always going to be a problem, but certain other bits have been removed – such as Sid Vicious breaking his leg and Mickie James’ infamous ‘V-lick’ (kids, ask your parents what that is). There’s also inconsistent censoring of language and nudity (sorry, fans of The Kat from Armageddon 1999). It does have that guy who killed his family in 2007, so censorship of minor things really ceases to make any sense. Maybe these were the versions already uploaded to their previous on-demand service or are the best format version of the events left around.

On any of the events that are rated higher than PG, the Network carries a disclaimer. It mentions that content may be included here that doesn’t fit with WWE’s corporate views. And then it reminds you that WWE performers are fictional characters. This pleases me; that midget bull may not have lost his tail after all.

The best thing they’ve got going for them? NXT. The stars of tomorrow, along with the best wrestlers in WWE, make this TV must-see. If you’re someone that longs for when wrestling itself was the focus, when talent had more say in their characters and had a chance to try new things – NXT is the place for you. On a channel that claims it’s covering the bases for fans young and old, this is the show that does it. Competitive contests, storylines that makes sense and characters that would never otherwise see the light of day on WWE TV. We can thank NXT for Seth Rollins, Bo Dallas, Paige and the Wyatt Family getting a chance to prove themselves and hone their craft the way WWE wants. Without NXT, we wouldn’t be getting Bo Dallas’ entertaining ‘inspirational’ character, which only came about because NXT fans couldn’t stand his babyface routine. NXT is the breeding ground for WWE, as well as a place for people to reinvent themselves. Anybody who can watch NXT should be. Right now, go and track down the entrance on YouTube for the Vaudevillains. It’s goofy, it’s different and it’s fun. It’s sports-entertainment.

The month after SummerSlam, we’ll know how the gamble has paid off for WWE, when all the original subscribers make the call to stay on board or not. In New Zealand, we’ll wait and see if the WWE Network will hit our shores at the end of this year/early 2015 as promised, or whether it’ll end up being another guarantee that WWE doesn’t fully come through on.

But seriously, it’s worth it for NXT. It’s the best thing they’re doing. By far.