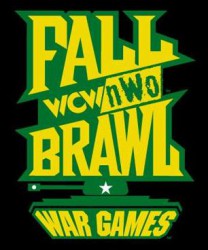 It’s about that time again, your weekly dose of wrestling’s past: Throwback Thursday. September 18 is not exactly a day that could be confused with a cornucopia of great moments, but includes a few memories from the annals of history, from The Fabulous Moolah’s tournament victory to begin her (questionable) 28-year reign as women’s World Champion, to the final episode of Monday Night Raw to air on the USA Network for five years, to the great WWE pay-per-view, Unforgiven, in 2005.

However, of all the potentially great visual moments from those listed—maybe not Ric Flair’s buttocks from the Unforgiven pay-per-view so much—we turn our attention back to WCW. On this day in 1994, WCW held a pay-per-view event that would ultimately set the ground for much of the Monday Night Wars. This event was Fall Brawl: War Games.

For an event where so much happened, and for an event where there was some quality wrestling, the entire affair was actually quite dull. I’m trying to figure out exactly what it was, but I just can’t put a finger on it.

The match positioning, for a start, was absolutely superb. There was a beautiful mix of technical, brawling, power, tag team, and hardcore wrestling styles resulting in numerous excellent matches. The wrestlers themselves were filled with charisma, from Johnny B Badd at the outset to Dusty Rhodes in the finale. And the broadcasting booth was a dream team of Bobby “The Brain” Heenan and Tony Schiavone with “Mean” Gene Okerlund doing the interviews.

I would say that the arena looked a bit dated, but it was 20 years ago. Also, it was before Eric Bischoff took a firm hold of the reins, so we could hardly expect Attitude Era-style characters and matches. But still, there was just something about it that felt old, even for its day.

It’s common knowledge that this was a time when WCW was struggling, and it may have been their over-reliance on dated wrestlers that created this feeling and lack of contemporary interest. However, they did that all throughout the Monday Night Wars and created some stunning television in doing so.

Whatever it was, it took away from what was in actuality a great pay-per-view.

Although the main event got me feeling for Col Robert Parker the same way I felt for Vince McMahon when he faced Bret Hart at WrestleMania, it definitely gave me a level of nostalgia, both in seeing the old legends as they were winding down their wrestling days (this would have been a point in time where Terry Funk had only lost a dozen or so retirement matches), and in seeing the men we now consider legends as they began their rise to superstardom (although I don’t think anybody saw “The Natural” becoming “The Nightmare”).

I wouldn’t place this pay-per-view high on a must-watch list, but it is definitely worth checking out. After all, this gives a brief glimpse at the precursor to the changing of the guard which would ultimately result in arguably the greatest age of professional wrestling.

It’s about that time again, your weekly dose of wrestling’s past: Throwback Thursday! February 19 is not a day that...

It’s about that time again, your weekly dose of wrestling’s past: Throwback Thursday. September 11 is filled with much notable...