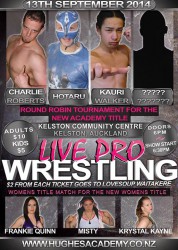 The ever-confident Roberts issued a message to his opponents earlier this week:

“It doesn’t matter who you three are, you’re stepping into the ring with the A-List Assassin. I’ve proved over the last few months that I am the best in New Zealand wrestling. Wellington, Auckland, everywhere in between, I’ve stomped my mark on those towns and proven why I am what I say I am. And on September 13, I get to add the first singles title to this waist.”

With each wrestler facing one another in singles competition there should be no doubt as to the rightful champion at the end of tonight’s Live Pro Wrestling event.

Whoever walks away with the new title around their waist will have decisively earned the right.

All three women pinned each other in a rare simultaneous cover during a qualifying match in August, leading to tonight’s triple threat.

Popular opinion has Frankie Quinn—who stole the show with a high-risk moonsault to the outside last month—as the favourite to leave with the Hughes Academy Women’s Championship, but Misty has made it clear she feels the odds should be on her side.

“Everyone is saying Frankie is going to win,” she wrote. “Eight years too long I’ve held in the fury. On September 13 the most epic Raging Thunder is set to rock the Kelston Community. Only one will be left standing…”

Daniels attacked Hughes after his match at August’s Live Pro Wrestling event, and later eliminated himself from a Battle Royal, so obviously has an issue with the Hughes Academy founder.

Tonight, Daniels will have the chance to do something about it when he takes on Graham Hughes in Hughes’ signature two-out-of-three falls bout.