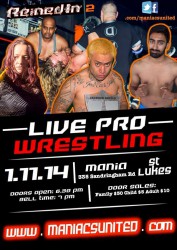 Kingston Eclipse’s battle with OCD is behind him but another challenger has stepped up to try and take home the Jackson Shield.

Eclipse vanquished JPE earlier this month at Reined In 1 to retain the Jackson Shield and temporarily end his rivalry with the OCD stable (Blake Kensington the Third, Dan Stryker, and JPE). That same night, Mr Viti made his Maniacs United debut with a win over KPW Tag Team Champion Stix, and seemed to developed a taste for beating champions.

Mr Viti and his partner, Dom “The Maverick” Alupis, were unable to take Bull Addams and Stix’s tag team titles from them later in the night, but Mr Viti hopes to fare better in singles competition tomorrow night with the Jackson Shield on the line.

Can Mr Viti make Kingston Eclipse’s reign with the Jackson Shield a short one, or will Eclipse add another name to the list of challengers who have failed to take his title?