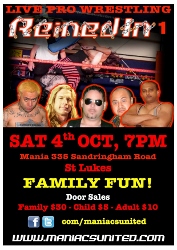 Kingston Eclipse has vowed to take out Maniacs United’s OCD faction one by one, and JPE is next on the Jackson Shield holder’s hit-list.

Eclipse and JPE will meet in the main event of Reined In 1 tomorrow night.

While the Jackson Shield is scheduled to be on the line, Eclipse is seeking revenge for Maniacs United General Manager Aadesh Patel first and foremost, who was attacked by OCD in the lead-up to tomorrow night’s event.

Patel, who is also a budding competitor on the Maniacs United roster, has been sidelined with an injury expected to keep him out of the ring for up to five weeks, but it won’t stop the General Manager from serving as the special referee for Eclipse’s match.

Dan Stryker found out what Eclipse is capable of at Underground 2 earlier this year, and has been sidelined for tomorrow night’s event as a result.

JPE’s other OCD stablemate, Blake Kensington the Third, is still an active competitor on the Maniacs United roster though, and could be in JPE’s corner when she challenges for the Jackson Shield.

With Patel serving as the special referee for Eclipse, and Kensington having JPE’s back, neither competitor will have a clear advantage tomorrow night, meaning the match—and the Jackson Shield—is anyone’s for the taking.