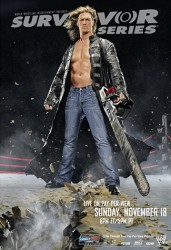 It’s about that time again, your weekly dose of wrestling’s past: Throwback Thursday. Unfortunately, Throwback Thursday has been missing for two weeks. During that time, we have missed Invader 1 defeating Dory Funk Jr for the WWC Puerto Rican Heavyweight Championship, and The Sheepherders defeating The Lightning Express to become the final UWF Tag Team Champions on October 16, Robert Fuller defeating Jerry Lawler for the NWA Southern Heavyweight Championship and WCW’s Halloween Havoc 1994 on October 23, and The Original Midnight Express defeating Bill Dundee & Jerry Lawler for the AWA World Tag Team Championships on our present day, October 30.

However, of all the potentially great visual moments from these days, October 30 is a little bit of a lacking day when looking at the WWE Network. As such, and in the knowledge that we are currently between the Hell in a Cell and Survivor Series pay-per-views, we will turn our attention to November 18, 2007: the only Survivor Series event featuring a Hell in a Cell match.

This is what you call a mixed bag event. On the one hand, those are some tremendous main event matches. On the other hand, we have a giant fighting a Leprechaun, and a five-minute match saturated with every diva on the roster. And on the third hand (we’ll borrow Mae Young’s son), we have some solid matches with little focus and, unfortunately, little importance.

This questionable booking makes it difficult to give a straight critique. The WWE Championship match told a brilliant story from start to finish with some solid wrestling between two surefire Hall of Famers. The World Heavyweight Championship match inside the Cell was another great story with one hell of a plot twist. The traditional Survivor Series elimination tag match had less of a storyline, but still featured some solid action.

Then you get to what could arguably be called the mid-card (occurring mostly at the beginning of the card). The World Tag Team Championship match didn’t have much story beyond respect, but it was still one done well. Meanwhile, the ECW Championship match focused on great wrestling between three up-and-comers.

And then you get to the bottom of the barrel. Despite all of the talent in that Divas match, we saw practically nothing and it was evident that the women’s division of old was now becoming a thing of the past. This was the beginning of a downward spiral for the women’s division, a downward spiral which WWE is still trying to escape. And I don’t think there’s really much to say about the Hornswoggle match, other than “it was nice to see Finlay twice in one night”.

I’ve talked about this period before, how this was a shift in the landscape of WWE. Have a look at those main event matches; only two of those men are still active WWE wrestlers, while one has retired, four have semi-retired, four have moved on to greener pastures, and two have passed on. This event is merely a skeleton of the modern product. However, that is not to say it is not worth watching.

This event created key chapters in the careers of several wrestlers, including CM Punk, Cody Rhodes, Finlay, Randy Orton, and Edge, to name a few. Was this the greatest Survivor Series ever? Not even close. However, it is still a tremendously entertaining event only held back by a couple of hiccups. If you have a few hours to spare, it is worth watching if only for the main events.

Tags: Hell in a CellSurvivor Series

"Hacksaw" Jim Duggan is the focal-point for wrestling fans at the Armageddon Expo this weekend. Who on the Gimme Five...

Brock Lesnar looks to be out of action until 2015. Does the lack of a WWE Champion create a lack...