Power Play XI: A battle for the heart and soul of NZWPW 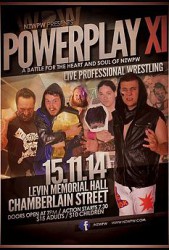 The card for NZWPW Power Play has been finalised, with the biggest main event in Power Play history.

A five-on-five elimination tag team match will headline the event—held in Levin this Saturday night—pitting Ben Mana and Paul Sayers’ “Team Warriors” against a five-man side headed by “Dream Catcher” Phil Woodgate.

Power Play traditionally hosts an NZWPW Championship match between the titleholder and the winner of the annual Over The Top Battle Royal. However, this year Over The Top winner Dream Catcher cashed-in his title opportunity early and walks into Power Play XI as the reigning NZWPW Champion.

Paul Sayers—who many would consider number one contender to the NZWPW Championship—tried to take Dream Catcher’s title from him at the Road to Power Play event late last week, but a locker-room-wide brawl led to the match being stopped and Dream Catcher walking away with the belt.

As such, Mana and Sayers have recruited Hayden Thiele, Jade Priest, and Mr Silver to exact some revenge on Dream Catcher.

“You’d better hold your NZWPW title close to your heart,” Sayers warned Dream Catcher shortly after Road to Power Play. “We as a team are coming to destroy you and your team at Power Play XI.”

“That’s right,” Ben Mana added, “because we are the past, we are the present, and we are the future. We are Team Warriors!”

Dream Catcher will be joined by Nobodies stablemates Axl and JC Star, as well as Bryant and Chad Howard of Rodeo Drive.

Levin’s own Misty will defend her Hughes Academy Women’s Championship for the first time, taking on number one contender Krystal Kayne.

Misty dominated Krystal and Frankie Quinn to win the title at the Hughes Academy’s Live Pro Wrestling event in September, while Krystal has proven herself worthy of another shot at the title with a win over Frankie and KPW Women’s Champion Scarlett in triple threat action last month.

“It will be a great night for fans in my home town,” Misty told the Horowhenua Chronicle. “Hopefully the Memorial Hall will be packed out.”

Frankie Quinn and Scarlett will battle over Scarlett’s KPW Women’s Championship in the second women’s title bout of the night.

Sayers to wrestle NJPW’s Goto at On the Mat

It appeared event organisers had already made their decision, but overwhelming support from the New Zealand pro-wrestling community has earned...